United Nations human rights investigators have accused the Syrian government of systematically torturing tens of thousands of its opponents.

Detainees are dying on a massive scale amounting to a Syrian government policy of "extermination" of the civilian population, a crime against humanity, the investigators said. 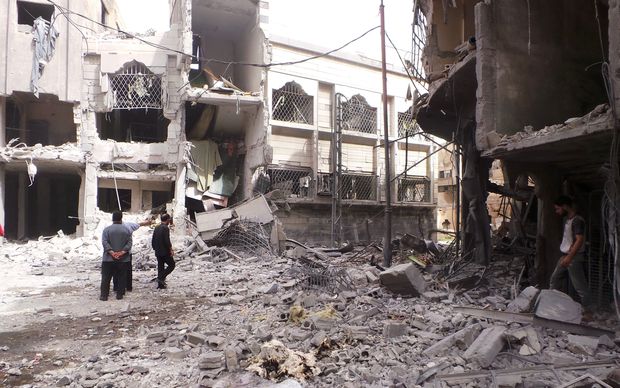 The civil war in Syria has claimed an estimated 250,000 lives. Investigators estimated tens of thousands of people are detained by Syria's government at any one time. Photo: AFP

Their report for the UN Human Rights Council said both loyalist and anti-government forces had committed possible war crimes.

Many detainees were tortured, some were beaten to death, and others died from lack of food, water, or medical care.

The findings come from interviews with hundreds of witnesses and cover the period since the start of anti-government protests in March 2011.

The UN commission of inquiry called on the Security Council to impose "targeted sanctions" on Syrian officials in the civilian and military hierarchy responsible for or complicit in deaths, torture and disappearances in custody, but stopped short of naming them.

In their report, the independent experts said they had also documented mass executions and torture of prisoners by two jihadi groups, Jabhat al-Nusra and Islamic State (ISIS), constituting war crimes.

Both government and rebel sides are accused of violence against people they detain, the investigators say, but the vast majority are being held by government agencies.

Investigators suspect tens of thousands of people are detained by Syria's government at any one time and describe the situation of detainees as an "urgent and large-scale crisis of human rights protection".

Their accounts "paint a terrifying picture of the magnitude of the violations taking place," it said.

The report covers March 2011 to November 2015 and is based on interviews with 621 survivors and witnesses and evidence gathered by the team led by chairman Paulo Pinheiro.

The civil war in Syria has claimed an estimated 250,000 lives so far. About 4.6 million people have fled Syria, while another 13.5 million are said to be in need of humanitarian assistance inside the country.

A pattern of arrests since March 2011 targeted Syrian civilians thought to be loyal to the opposition, or simply insufficiently loyal to the government.

Senior government figures clearly know about and approve of the abuse, the report said.

Most deaths in detention were documented as occurring in locations controlled by the Syrian intelligence services.

"Government officials intentionally maintained such poor conditions of detention for prisoners as to have been life-threatening, and were aware that mass deaths of detainees would result," UN human rights investigator Sergio Pinheiro said in a statement.

"These actions, in pursuance of a state policy, amount to extermination as a crime against humanity."