A large construction crane has collapsed in lower Manhattan in New York City, killing one person and injuring at least two others. 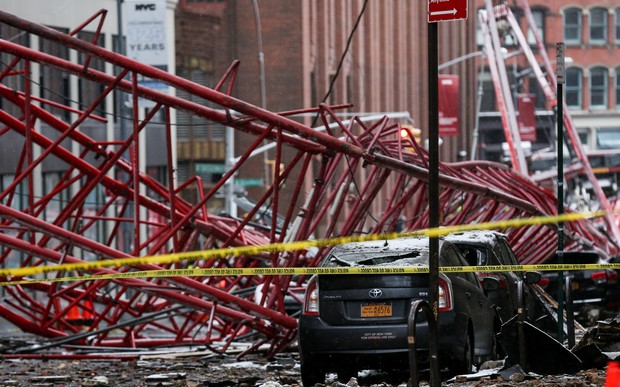 One person, who was sitting in a parked car, was killed when the crane crashed down on top of them. Photo: AFP

The Fire Department of New York confirmed the fatality and is on the scene responding to the accident.

The collapse happened along West Broadway early on Friday morning (local time) in the Tribeca neighbourhood.

The downed crane, which filled the street, fell onto numerous parked cars.

New York City Mayor Bill de Blasio said the victim was sitting in a parked car at the time of the accident, and that it was caused by high winds. 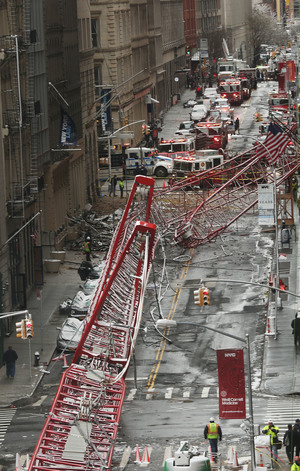 Emergency workers converge at the scene of a collapsed crane in a roadway in lower Manhattan. Photo: AFP

Workers were in the process of lowering the crane due to the high winds when it collapsed. No workers were injured.

"It was right outside my window," witness Robert Harold told the AP news agency.

"It was a crashing sound. You could feel the vibration in the building. I looked out the window and saw it lying in the street."

Mr Harold said he saw someone trapped in a car and someone lying in the street.

The crane was replacing air conditioning equipment in an existing building when the crash occurred, the first for New York City since 2008.

"The fact is, this is a very very sad incident, we lost a life," Mr De Blasio said.

"If you go out there and see what happened, thank God it was not worse."

All cranes in New York City have been ordered to be lowered after the incident.

The weather in New York City was windy with snow flurries.

Public transportation was delayed and subway trains were bypassing the area due to the collapsed crane.