A critically endangered tortoise, highly sought after by wildlife traffickers because of its unusual star-shaped shell, has been stolen from Perth Zoo. 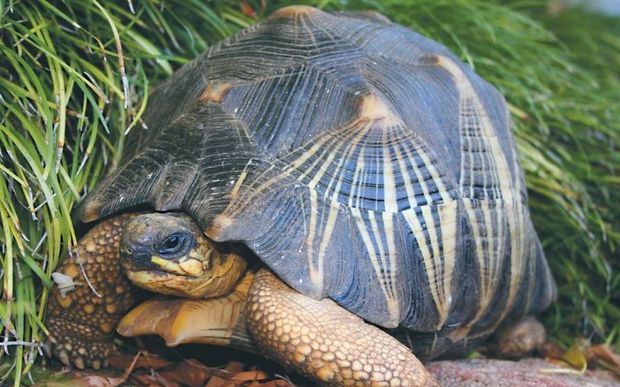 The 10-year-old radiated tortoise was missing from its exhibit when zoo keepers arrived on Tuesday morning.

The zoo believes it was stolen on Monday evening, and police are now searching for the reptile and the thief.

Staff have expressed concern the creature could be sold on the black market, and said they were worried for its welfare because it needed a specialised diet.

"This is an extremely rare tortoise and in danger of extinction," Perth Zoo director of life sciences Maria Finnigan said.

"The reason for the theft is unknown, however due to their stunning shells, radiated tortoises are heavily impacted by the illegal wildlife trade and regularly trafficked and sold on the black market.

"We hold grave concerns for the tortoise.

"This species have a specialised diet and like all tortoises it needs help thermo-regulating which is especially important at the moment as we are experiencing cooler mornings."

The animal needs to be kept at a certain temperature to be able to digest its food.

The tortoise is a sub-adult, about 15 centimetres in diameter.

There was no sign of a break-in at the exhibit, Mr Finnigan said.

"But again it's just speculation because it really does need to be looked at carefully."

The zoo is appealing for anyone with information to contact them or the police.

Radiated tortoises mainly eat grasses and are critically endangered because of habitat loss and illegal trafficking.

They are native to Madagascar and are the largest of the star tortoise species.

They are hunted for their shells, which are often turned into ornaments.