One man is brain-dead and another five people are in hospital after an experimental drug was administered to 90 people in a French clinical trial.

There is no known antidote to the drug, the chief neuroscientist at the hospital in Rennes Professor Gilles Edan said. 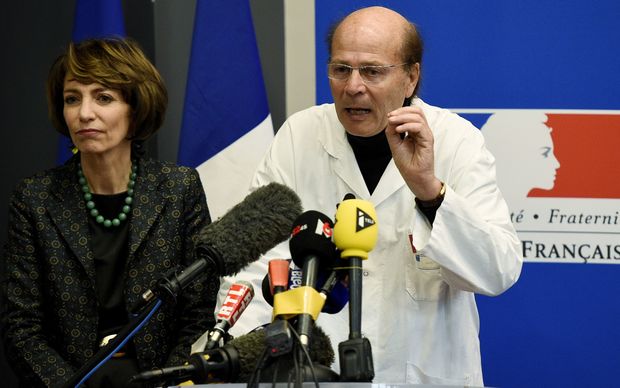 Of the five men in hospital, three could have permanent brain damage, Prof Edan added.

Reports that the drug is a cannabis-based painkiller have been denied by the health ministry.

The trial, which involved taking the drug orally and has now been suspended, was conducted by a private laboratory in Rennes.

All those who volunteered for the trial have been recalled and the Paris prosecutor's office has opened an investigation.

Health Minister Marisol Touraine pledged to "get to the bottom... of this tragic accident".

"I was overwhelmed by their distress" she told reporters. "Their lives have been brutally turned upside down".

The trial was conducted by Biotrial, a French-based company with an international reputation which has carried out thousands of trials since it was set up in 1989.

In a message on its website, the company said that "serious adverse events related to the test drug" had occurred.

The company insisted that "international regulations and Biotrial's procedures were followed at every stage".

According to the health ministry, the adverse effects occurred on Thursday.

Trials typically have three phases to assess a new medicine for safety and effectiveness.

Phase I tests for safety. A small number of people, sometimes healthy, and sometimes with a medical condition, are given a tiny dose of the drug under careful supervision, not to test if the drug works, but in order to check for any side effects.

Phase II sees the drug given to people who have a medical condition to see if it does indeed help them.

Phase III trials are only for medicines or devices that have already passed the first two stages, and involve them being compared to existing treatments or a placebo. The trials often last a year or more, involving several thousand patients.

The study was a Phase I clinical trial, in which healthy volunteers take the medication to evaluate the safety of its use, the ministry said.

Before any new medicine can be given to patients, detailed information about how it works and how safe it is must be collected.

Clinical trials are the key to getting that data - and without volunteers to take part in the trials, there would be no new treatments for serious diseases such as cancer, multiple sclerosis and arthritis.

Every year around the world thousands of people take part in clinical trials but incidents like this are very rare, the BBC's Hugh Schofield reports from Paris.

New EU regulations to speed up clinical drug trials and streamline testing procedures across the 28-nation bloc are due to take effect in May.