Republican presidential front-runner Donald Trump and top challenger Ted Cruz clashed sharply on Thursday (local time) over the Texas senator's eligibility to run for the White House during a tense debate weeks before voters start to pick the party's nominee. 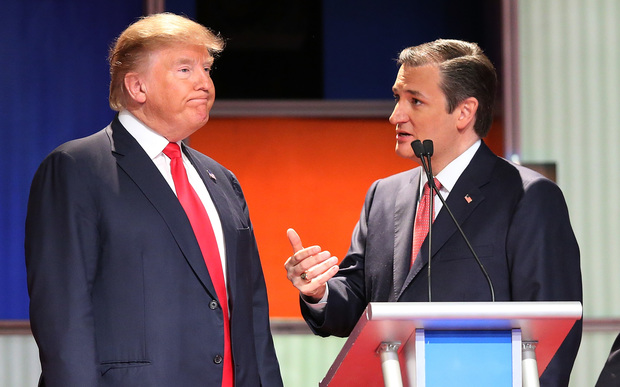 Businessman and reality TV star Mr Trump said Mr Cruz's path to the presidency was in question because he was born in Canada. The US Constitution mandates that only "natural born" citizens can become president of the United States.

Mr Cruz, who was born in Calgary, Alberta, to a US citizen mother and a Cuban father, accused Mr Trump of bringing up his birthplace simply because Mr Cruz was leading some polls in Iowa, which holds the first nominating contest on February 1 in the run up to the November general election.

Mr Cruz said Mr Trump, who led the movement questioning whether the Hawaiian-born President Barack Obama was really from the United States, had asked his lawyers to look into the issue of Mr Cruz's birth in September and concluded there were no issues.

"Since September, the Constitution hasn't changed, but the poll numbers have," Mr Cruz said. "And I recognise that Donald is dismayed that his poll numbers are dropping in Iowa, but the facts and the law here are really clear."

Mr Trump said Democrats would sue if Mr Cruz were on the Republican ticket, putting their party's chances of winning at risk.

"There's a big question mark on your head," Mr Trump told his rival, with whom he has had friendly relations over the past year on the campaign trail. "The Democrats are going to bring a lawsuit."

He urged Mr Cruz, who is a lawyer, to ask a court to put the question to rest.

Mr Trump, who has proven to be a master at finding a perceived weakness in an opponent, has made an increasing issue of Mr Cruz's Canadian birth. He admitted during the debate that he was doing so because of Mr Cruz's improving political prospects.

Mr Cruz has steered clear of criticising Mr Trump during his rise to the top of the national polls, but that ended during Thursday's debate.

In addition to fighting back over his presidential eligibility, Mr Cruz accused Trump of not being a conservative because he was born in New York and still lives there.

"Everyone understands that the values of New York City are socially liberal, are pro-abortion, are pro-gay marriage," Mr Cruz said.

Mr Trump rebutted Mr Cruz's comments by referring to the September 11, 2001 attacks. He said New Yorkers came together to support each other after thousands were killed and cleaned up the site of the destroyed 110-story World Trade Center's twin towers, enduring "the smell of death" for months.

"That was a very insulting statement that Ted made," Mr Trump said.

The sixth Republican debate, at the North Charleston Coliseum in the swing state of South Carolina, takes place at a tense time for the Republican field.

Mr Cruz, who has taken the lead in some polls of Iowa Republican voters, did well on social media. Social media monitoring tool Zoomph saw total positive mentions for Mr Cruz climb by more than 150 percent while he sparred with Mr Trump.

Mr Trump is far ahead nationally.

The other candidates sought to gain traction in the debate with criticism of Obama's policies on guns and also threw barbs about his State of the Union address.

In that speech, Obama sought to offer a more optimistic vision for America's future and he singled out Mr Trump, without naming him, for calling on the United States to ban Muslims temporarily from entering the country.

Bush urged Mr Trump to change his views on the issue. Mr Trump, who noted that his poll numbers rose after making that policy proposal, said his mind was made up.

The billionaire also said he would not "care less" about his company, The Trump Organization, if he became president, allowing executives and his children to run it.

Rubio, once viewed by the Republican establishment and many donors as a rising star, said Mr Cruz was a political opportunist who was not a consistent conservative.