At least 14 people are killed in a bombing outside a polio vaccination centre in the south-western Pakistani city of Quetta, officials say. 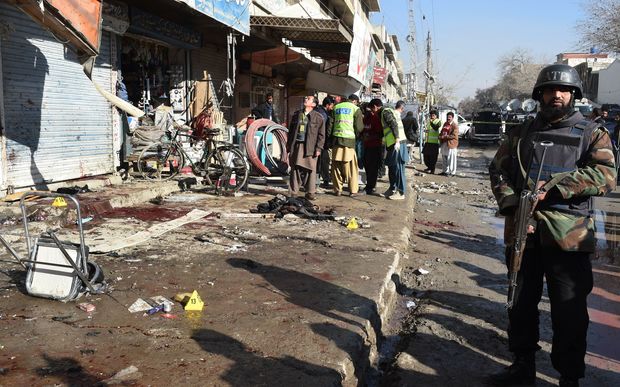 The scene of the bomb blast Photo: AFP

Many of the casualties are thought to have been police guarding the clinic.

Armed guards are routine for polio workers in Pakistan, who have been the target of many deadly attacks by Islamist militants in recent years.

It is not yet clear who carried out the bombing and whether the attackers intended to hit polio workers.

Pakistan and Afghanistan are the only two countries where the disease is still endemic.

The explosion took place in the morning around the time workers report for duty before heading out on their vaccination rounds, Sarfaraz Bugti, a minister for Balochistan province where the blast took place, told reporters. About 20 people were injured.

"We are living in a war zone and I can't say anything about the nature of the blast," Mr Bugti is quoted by the AFP news agency as saying.

Meanwhile, the Pakistan consulate in the eastern Afghan city of Jalalabad has been sealed off after a suicide bomber detonated himself, killing at least two people and wounding two others.

The provincial governor's spokesman said the bomber had tried to join a queue of people seeking visas to Pakistan and blew himself up after being prevented from entering the building.

The number of attacks on polio teams in Pakistan declined last year, compared with 2014 which saw several deadly assaults.

In that year, Pakistan recorded its highest number of polio cases since 1999. Health officials blamed the rise in cases on the attacks on immunisation teams.

Most of those new infections were in north-west Pakistan where militants regularly targeted roving health teams.

But officials say that 2015 also saw a significant decline in polio cases, largely because vaccination teams could reach areas that were previously off limits because of militancy.

The last attack on a polio target in Pakistan is thought to have taken place in north-western Swabi district in November 2015, when the local polio co-ordinator was shot dead by unidentified gunmen.