Desperate residents are evacuating from communities south of Perth, with some ferried out by boat, as a massive out of control bushfire threatens lives and homes. 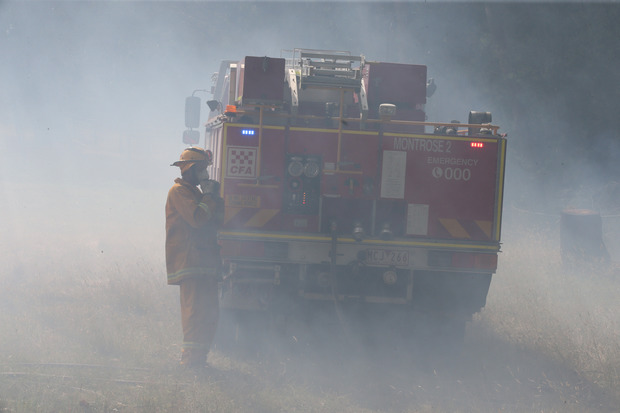 An emergency warning has been issued for the towns of Waroona and Preston Beach.

More than 100 residents have flooded into evacuation centres set up in the nearby town of Pinjarra, while some have fled to the beach and been ferried out by boat, as the fire shuts major roads.

People west of the South Western Highway are being told to leave in a westerly direction if it is safe to do so.

For people east of the South Western Highway, and those in Preston Beach, the Department of Fire and Emergency Services said it was too late to leave.

Those residents were urged to shelter in their homes and actively defend them, or if unable to do so they should shelter at the beach.

The warning also applied to the Alcoa mine site and nearby properties.

DPAW spokesman Benson Todd said the fire was started by a lightning strike on Tuesday morning at Lane Pool Reserve near Dwellingup, 50 kilometres north-east of Waroona.

He said strong winds of 40 to 60 kilometres an hour had fanned the fire and pushed it towards Waroona.

Mr Todd said the decision to evacuate both towns was taken when embers started dropping in the streets.

He said there had been unconfirmed reports that the fire had destroyed some buildings, but authorities had not been able to verify them.

Weather conditions were forecast to be extremely hot and humid in the region, with a top of 39°C predicted for Pinjarra today.

Winds of up to 40 kilometres an hour were expected, while the fire risk for the west inland region was very high.