A spectacular New Year's fireworks display has gone ahead as scheduled at the world's tallest building in Dubai, despite a massive fire nearby.

A huge fire broke out in the high-rise The Address Hotel in downtown Dubai in the United Arab Emirates close to the world's tallest skyscraper Burj Khalifa, where the fireworks display took place. 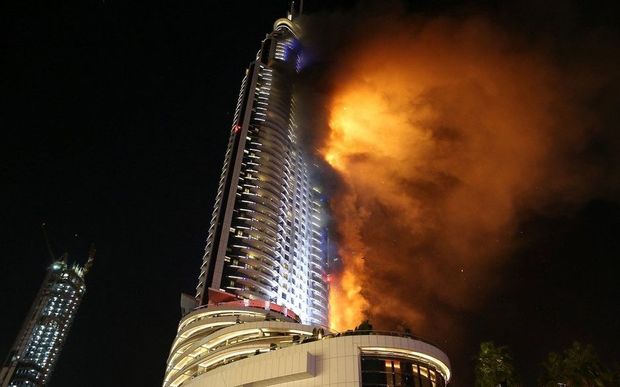 Burning debris fell from the 300m tall building as firefighters arrived at the scene. Officials say the fire has been brought largely under control, while an investigation into what caused the blaze is underway.

Sixteen people suffered minor injuries and another had a heart attack but everyone was safely evacuated from the hotel.

Fire appeared to have engulfed much of the building, which has more than 60 storeys and is a luxury five-star hotel and apartment complex.

Tourist Michelle Duque, who is visiting Dubai, said: "All of a sudden we saw this huge black plume of black smoke coming between the Khalifa Tower and the hotel.

"The flames burst out really big and before we knew it the whole of the Address Hotel was covered in orange flames." 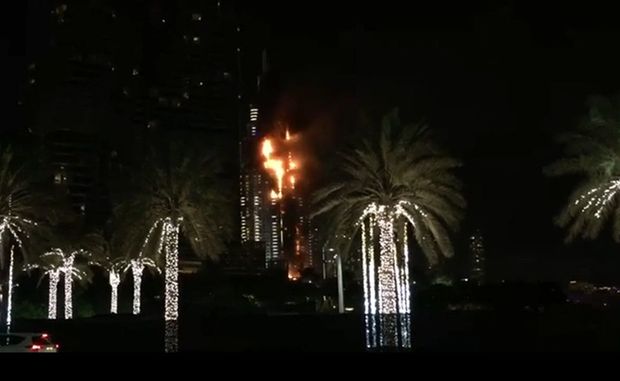 Dubai is a trade, tourism and investment hub for the Gulf region, and is one of seven emirates that make up the United Arab Emirates (UAE).

Every year, Dubai stages one of the world's most spectacular fireworks displays from the 160-storey Burj, which opened in 2010 and stands almost 830 metres tall.