Eleven people have been killed in tornadoes in Texas, police say, with heavy rain and snow causing deaths and disruption in a number of other states.

Over 40 deaths have now been reported as a result of the storms. 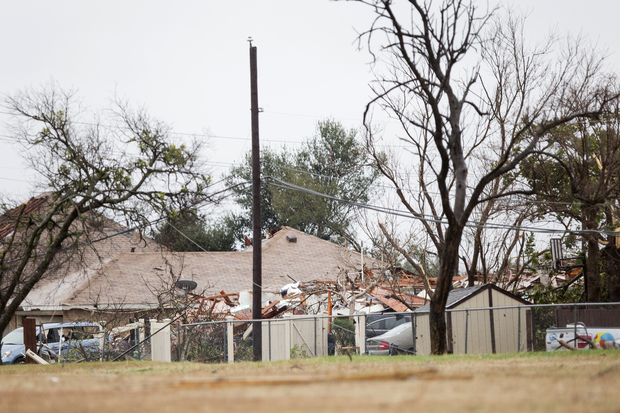 At least eight people died in Garland, near Dallas, five of them when their cars were blown off a motorway. Three bodies were found in other towns in the state.

In the west of the state, snow combined with high winds to cause drifts that left a number of roads impassable.

The storms across the south have been unusually powerful for winter.

Reports from Texas said churches were destroyed, cars mangled and trees toppled across a 64km zone from south of Dallas up to suburbs in the north-east.

Police in Garland believed that tornado-strength winds late on Saturday were the cause of car accidents, Melinda Urbina from the Dallas County Sheriff's office told the BBC.

Ms Urbina said the winds "tossed cars around" and vehicles were later found below Interstate 30, about 24km north-east of Dallas. She urged local residents to stay off the roads.

In a Sunday morning briefing, Lt Pedro Barineau, of Garland Police, said 600 buildings had been damaged. "It is total devastation," he said.

The Red Cross is setting up shelters for those with damaged homes.

Two people were also found dead at a petrol station in Copeville, and a third was killed in Blue Ridge, according to media reports in Dallas.

Kevin Taylor, a church pastor in Glenn Heights, south of Dallas, described to WFAA how his church began collapsing around him.

"Doors began to turn inward, when I saw that I figured the glass was going to shatter and hit me in the face, so I broke and ran down the hallway and by the time I got just a few feet everything collapsed and went dark and fell on top of me," he said, adding: "By the grace of God I'm here though."

Some 25,000 people were without power on Sunday morning.

The National Weather Service confirmed several tornadoes had touched down near Dallas and other towns in northern Texas.

In the Texas Panhandle and parts of New Mexico and Oklahoma, the problem was snow - high winds caused drifts that have made a number of roads impassable.

Interstate 40 west of Amarillo to the New Mexico border is set to be shut until Monday morning.

The deaths in Dallas come as much of the south-central region of the US has been hit by severe weather in the past week.

Further north, six people died in two incidents when cars drove into flooded roads in Missouri. Another driver was found dead in his car in a creek.

Three adults and two children also drowned in southern Illinois when their vehicle was swept away.

While extreme weather in the US around Christmas is not unknown, meteorologists say that unseasonably high temperatures in some areas contributed to the severity of the storms.

The forecast for the eastern US is of continuing high temperatures - Washington DC pushed close to 21°C on Sunday.