A man has been pulled out alive more than 60 hours after being buried when a waste heap collapsed on an industrial estate in the southern Chinese city of Shenzhen.

There could be at least one other survivor, according to state media. 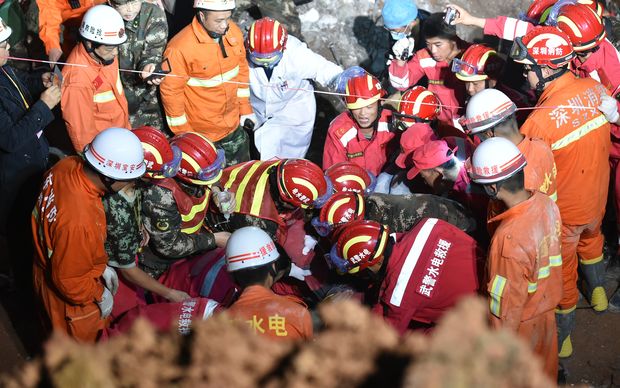 A survivor is found at the site of the landslide at an industrial park in Shenzhen Photo: AFP

The survivor, who was in a coherent state though his legs had been crushed, told the soldiers who rescued him there was another survivor close by.

China's official Xinhua news agency later said that another body was also discovered, although it was not clear if that was the person to whom the survivor had referred.

More than 70 people were missing in China's latest industrial disaster, the government has said.

However this figure continued to be revised down as authorities made contact with people who were believed to have been buried but were not.

This mudslide in China covers the size of 71 football fields, is 32 feet deep and it's swallowed up 33 buildings. https://t.co/cYW2izWfsp

A giant deluge of mud and construction waste from the overfull dump site buried 33 buildings at the industrial park on Sunday.

It was the second major man-made disaster in China in four months. At least 160 people were killed in massive chemical blasts in the northern port city of Tianjin in August. 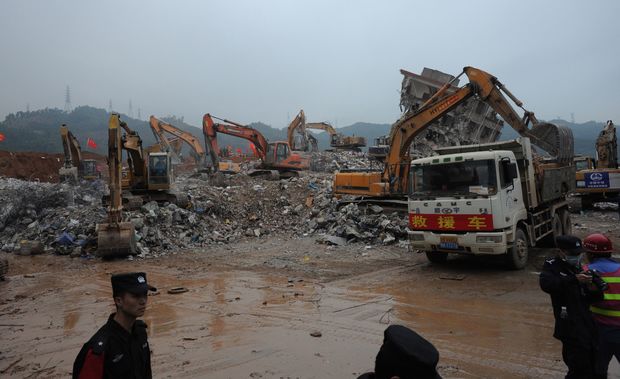 Excavators work at the site of the landslide that hit the industrial park in Shenzhen Photo: AFP

With growing worries about China's industrial safety standards and lack of oversight, Premier Li Keqiang ordered an investigation within hours of the mudslide in Shenzhen, a town that has boomed with the breakneck growth in the world's second-largest economy.