The United Nations Security Council has voted unanimously to adopt a resolution targeting the funding of Islamic State. 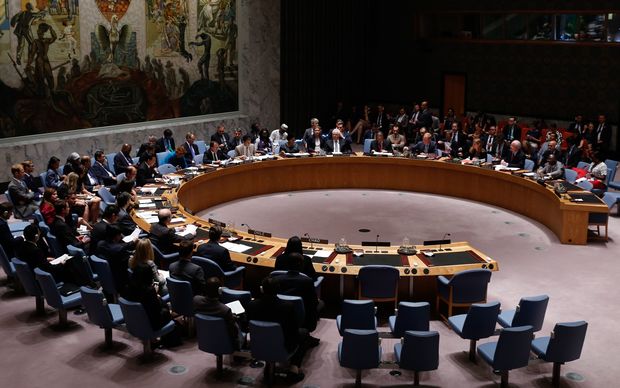 The US and Russian-drafted resolution urges countries to move vigorously and decisively to cut the flow of funds to IS, such as by preventing its smuggling of oil and antiquities.

It ties together existing measures targeting Islamic State's finances and offers guidance on implementation in a bid to push more countries to act.

The resolution builds on a Security Council action in February that banned trade in antiquities from Syria, threatened sanctions on anyone buying oil from Islamic State and al Qaeda-linked Nusra Front militants and urged states to stop kidnap ransom payments.

The 15-member council warned on Thursday that some countries were failing to implement long-standing sanctions against Islamic State, as an unprecedented meeting of finance ministers put the global focus on cutting off the militant group's funds.

"This resolution is a critical step, but the real test will be determined by actions we each take after adoption," US Treasury Secretary Jack Lew told the council after the vote.

"We need meaningful implementation, coordination and enforcement from each country represented here, and many others."

The resolution "expresses concern about the lack of implementation" of previous resolutions targeting al Qaeda and Islamic State, including an "insufficient level of reporting" by states on measures they have taken to implement UN sanctions.

The council renamed its al Qaeda sanctions regime the "ISIL (Daesh) and al Qaeda Sanctions Committee" - Islamic State is also known as ISIL and Daesh - and called on states to report within 120 days on their implementation of sanctions.

Islamic State, which was blacklisted by the Security Council sanctions committee as an offshoot of al Qaeda in Iraq in May 2013, has seized swaths of territory in Iraq and Syria where it has proclaimed a caliphate.

The council also specifically asked states to report on "interdictions in their territory of any oil, oil products, modular refineries, and related material being transferred to or from (Islamic State or Nusra Front)."

Mr Lew, chair of Thursday's meeting because the United States is the council president for December, said Islamic State had reaped an estimated $US500 million from black-market oil sales and "millions more from the people it brutalizes and extorts."

There are currently 243 individuals and 74 entities on the ISIL and al Qaeda sanctions list. They are subject to an arms embargo and a global asset freeze and travel ban.

French Finance Minister Michel Sapin said the new council resolution would "not be a deterrent if it does not lead to the UN Security Council adding names to the list."

The resolution makes clear that states are required to stop their citizens from funding or providing services to "terrorist organizations or individual terrorists for any purpose, including but not limited to recruitment, training, or travel, even in the absence of a link to a specific terrorist act."

United Nations experts have said about 22,000 foreign fighters from some 100 countries are linked to al Qaeda and Islamic State in Syria and Iraq.