The mother of a student who died after being gang-raped on a bus in Delhi has publicly revealed her daughter's name. 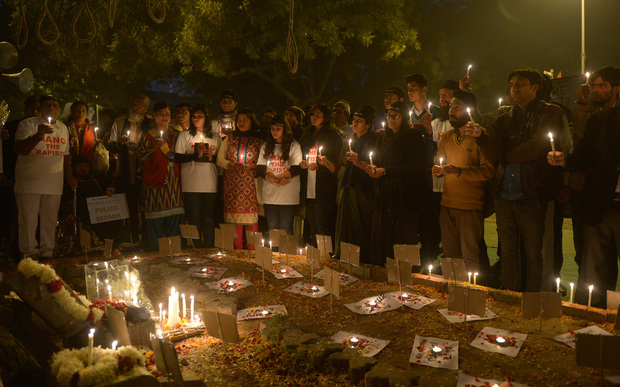 Activists mark the second anniversary of the fatal gang-rape of a Delhi student. Photo: AFP

Asha Singh told a crowd on Wednesday that she felt "no shame" in announcing her daughter's name: "Her name was Jyoti Singh."

The 23-year-old physiotherapy student died after being brutally raped by six men on a moving bus in 2012, causing global outrage.

Their identities are often hidden in a bid to protect them from being shunned in society.

"I say this in front of you all that her name was Jyoti Singh," Asha Singh said at a public gathering in Delhi, three years to the day of the attack.

"There is no need for us to feel any shame. It is the perpetrators of heinous crimes who must feel ashamed of themselves."

Ms Singh was attacked on board a bus after watching a film in south Delhi with a male friend. Police said she was raped for almost an hour and beaten with iron bars.

Four men were convicted of the crime and handed the death penalty in 2014.

One died in jail in March while another, aged 17 at the time, is set to be released after serving three years in a reform facility - the maximum term possible for a juvenile in India.

The victim's father on Wednesday condemned the decision to release the minor, saying: "Almost every day we read about even small girls being raped. If criminals like him are let off I fear what will happen to society."

Many called for him to be tried as an adult at the time.