Nearly 90 people have been killed during clashes in the capital of the Republic of Burundi, the army says - the worst outbreak of violence in the East African nation since a failed coup in May. 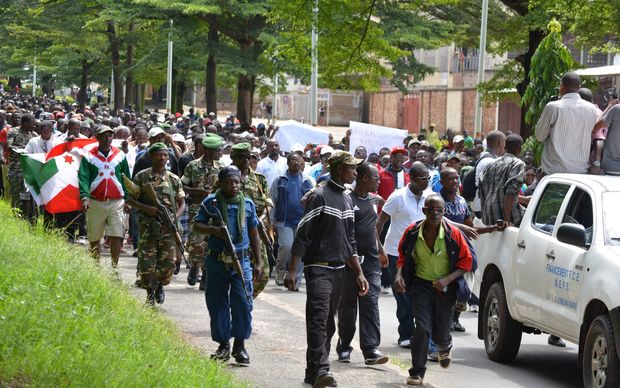 Blasts and gunfire echoed around Bujumbura for most of Friday and residents said officials spent the day collecting bullet-riddled bodies from city streets.

Unrest erupted in April when President Pierre Nkurunziza announced plans for a third term in office. A 12-year civil war, which ended in 2005, pitted rebel groups of the Hutu majority, including one led by Nkurunziza, against an army then led by the Tutsi minority.

The latest turmoil has unnerved a region still volatile two decades after the genocide in neighbouring Rwanda, which has the same ethnic mix. 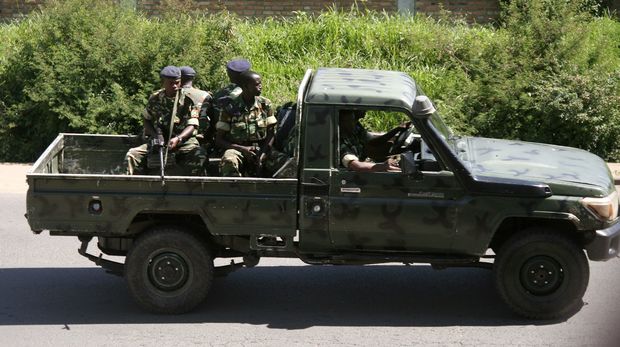 Military personnel sit aboard a vehicle driving in Bujumbura on December 11, 2015. Photo: AFP

Friday's clashes were condemned by the United States, which like other Western powers fears the Central African nation could slide back into ethnic conflict.

The United Nations Security Council was briefed on the developments in Burundi late on Friday. US Ambassador to the United Nations Samantha Power, who is president of the council for December, said the 15-member body was ready to consider "further steps."

The police did not identify the gunmen. One of the generals behind the failed coup attempt said afterwards that his rebel group still aimed to topple the president.

Residents said some of Friday's dead were killed after being rounded up by the police in house-to-house searches, an allegation the police denied.

According to witnesses and pictures circulated on social media, some bodies had their hands tied behind their backs.

"They entered in our compounds, gathered all young and middle-aged men, took them and killed them away from their homes," said one resident in Nyakabiga.

Police spokesman Pierre Nkurikiye said there were "no collateral victims" during Friday's clashes.

Baratuza said some attackers who attempted to raid the Ngagara military camp retreated and were pursued by security forces who "inflicted on them considerable losses."

Kenya Airways cancelled flights to Burundi on Friday but said it would resume flying to Bujumbura on Sunday.

More than 220,000 people have fled the violence this year to neighbouring Rwanda, Tanzania, Uganda and Congo.

The US State Department warned Americans on Sunday against traveling to Burundi and ordered all dependents and non-emergency US government personnel out of the country, citing violence after contested elections. It also recommended that all citizens in the country leave as soon as possible.

Former colonial power Belgium on Sunday condemned the violence in Burundi and called for an investigation.

In a draft 2016 budget passed by the cabinet on Friday, Burundi plans to slash public spending by 16 percent next year and expects foreign aid to almost halve.

In October Belgium halted some aid to the government of Burundi in protest at Nkurunziza's disputed third term. The European Union has imposed travel bans and asset freezes on four officials close to Nkurunziza who are accused of using excessive force during clashes in the run-up to his re-election in July.