Jihadi brides who join Islamic State (IS) often go on to actively recruit more women to come to Syria, a researcher says. 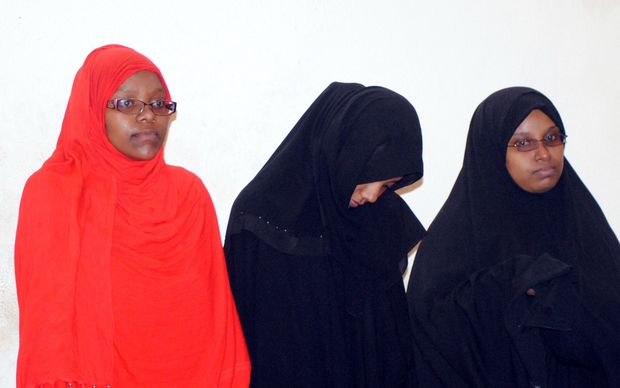 Three women arrested in Kenya who were allegedly planning to travel to Syria to join IS Photo: AFP

Security Intelligence Service (SIS) director Rebecca Kitteridge told Parliament on Tuesday that up to 12 New Zealand women who have gone to Syria and Iraq could be jihadi brides in IS.

The UK-based Institute of Strategic Dialogue has been keeping a close watch on those who have travelled to the region, and said 550 Western women have gone there to join IS. A researcher who worked on a report for the institute told Nine to Noon this morning that the women frequently go on to recruit other women.

The institute tracks over 130 women via their social media platforms. The women range hugely - some are as young as 14, some up to 45, though most are quite young - around the 16-22 age group.

One is a doctor with a PhD who practices medicine.

While many Western women do not go there with the purpose of becoming a jihadi bride, once there, they are expected to be a good wife to the jihandist husband they are betrothed to, and a mother to the next generation of jihadism.

The institute's recent report, 'Til Martyrdom Do Us Part', looked at the role women play in IS, including as recruiters of more women.

The report was co-written by researcher Erin Saltman, who spoke with Nine To Noon from London about the role of women in jihadist organisations like IS.

"Some of the women have been co-ordinated with men before they arrive, some - obviously a lot of women from around the region have just gone over with husbands that they already have, but that's not really the group that we're looking at, we're really looking at women that are going over and are marrying jihadists that are already over there," Ms Saltman said.

"And actually they represent this very important part of what Daesh or IS is trying to do, (which) is state-building. And actually women are key to this idea that they're actually building a state. Because they are what's necessary to build this next generation - as it were." 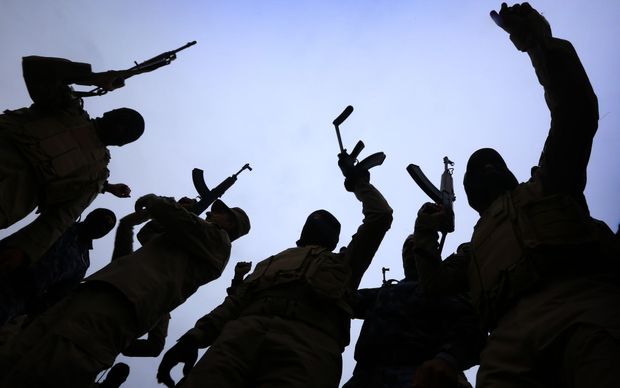 Iraqi policemen raise their weapons during a training session as they prepare to recapture Mosul from Islamic State fighters. Photo: AFP

Ms Saltman said there can be language barriers between the jihadi men and their new or would-be brides, who can't speak the local language - but the women usually try to learn the language.

It was understood that women don't return to their original Western countries, Ms Saltman said.

"It's very difficult for a women to come back."

"We don't actually communicate with the women, for a couple of reasons. One is that they give us huge amount of details openly, so we don't even need to ask a lot of questions... the second is, we don't want to put that female at risk from our research, so if their husbands are monitoring the communications they have online and we're saying certain things to them, we will never know the repercussion(s) that (we're causing) them. So actually that's not a risk that we're willing to take. "

"But we do know that it's extremely difficult for women to leave. When you arrive in the territory your passport and identification is taken away from you, and, if you're a female, you're not allowed to leave the house without male permission and a male escort. So to be a female trying to leave the Islamic State territory, you put yourself immediately at physical risk," Ms Saltman said.

"So what we see is the most powerful recruiters are women that have already gone over themselves. And actually one of the things that they feel empowered about is by bringing other women, other friends, other people from their home countries to come and join them. So they act as propaganda ambassadors, if you will, for Daesh," Ms Saltman said.

"And it's one of their few outlets, because as you can imagine as I said, living there, they're absolutely not supposed to be in combat. They're given very light military training but... it's a very chauvinistic culture, they're not given freedom of movement as you would in another culture, so they're very active online.

Their motivation is a mixture of grievances, feeling alienated from different parts of their society and being very disappointed in international politics, she said.

"A lot of these women are very politically engaged, they're very upset with the violence of the Assad government (in Syria) and feel like international forces aren't doing anything about it. But what Daesh offers them is empowerment. They're saying that they're part of a utopian movement, they're creating this utopian society, they're finding sisterhood in belonging, they're finding passion and romance," Ms Saltman said.

"So it's actually what's being offered and they're being offered quite a lot. And of course the reality on the ground is very different."

Despite the dissonance between what they're told living under IS in Syria will be like and what they discover, the women help recruit others because they are psychologically traumatised and they then force themselves to radicalise themselves further, Ms Saltman said.

Partly this is to keep themselves safe but it's also because they're being indoctrinated daily.

"(The IS jihadist men are) trying to convince you that this is really the ultimate jihad, this is God that's ordaining you to do this so it's righteousness that surrounds this."