Two children drove 35km for help in remote New South Wales after their father inhaled gas while working in a well and their mother fell in trying to help him. 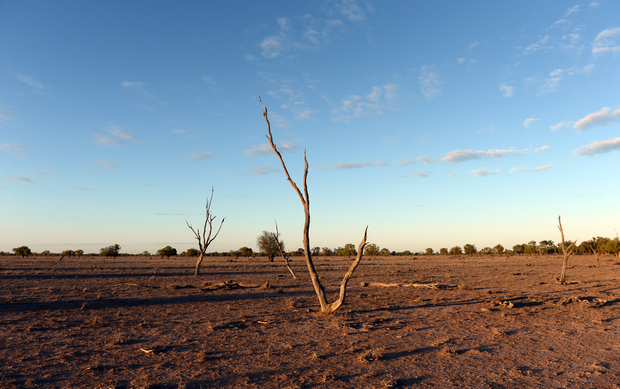 A file photo of a dry paddock near Lightning Ridge, NSW. Photo: AAP

Police said the 29-year-old man was installing a water pump at the bottom of the well near Weilmoringle - about 225km northwest of Lightning Ridge in northwestern NSW - when he was overwhelmed by fumes, about 5.30pm (local time) on Saturday.

He died at the scene.

The man's 28-year-old partner started climbing down the well to help, but fell about 30m after the rope ladder broke.

Police said the couple's two children, aged 12 and 13, drove 35km to a nearby road, where they flagged down a passing driver, who phoned emergency services.

Superintendent Jim Stewart from the Castlereagh Local Area Command said the incident demonstrated the skills of people in the bush and their ability to survive.

"It's a large property, the kids obviously have the skills and the knowledge to be able to drive a vehicle 35 or so kilometres to get help," Superintendent Stewart said.

"But also to take people back to where they were too in such a panicked state, I can only imagine the panic the poor kids were in.

"If [the woman] had not been found, and certainly over time there could have been a very real chance that lady could have lost her life.

"Thanks to the response of those young boys, her children, I can only say how proud their mother would be of them and her family."

Emergency services, including fire and rescue teams, police and paramedics, arrived and started a rescue operation.

The woman was rescued from the well about 1am on Sunday, eight hours after the ordeal began.

She was suffering shock and suspected carbon monoxide poisoning, and was flown to hospital in a serious condition.

Police said they were not treating the incident as suspicious.

A report will be prepared for the coroner.