The US military will let women serve in all combat roles, in a historic move striking down gender barriers in the armed forces. 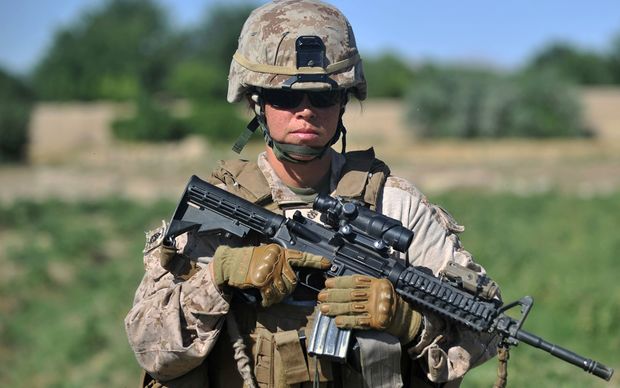 Defense Secretary Ash Carter said as long as women qualified and met the standards, they will now be able to contribute "in ways they could not before".

"They'll be allowed to drive tanks, fire mortars, and lead infantry soldiers into combat. They'll be able to serve as Army Rangers and Green Berets, Navy SEALS, Marine Corps infantry, Air Force parajumpers and everything else that was previously open only to men," he said.

Mr Carter said the opening to women would take place following a 30-day review period, after which they would be integrated into the new roles in a "deliberate and methodical manner" as positions come open. The waiting period enables Congress to review the decision and raise any objections.

Mr Carter acknowledged the decision could lead to more debate over whether women would have to register for the draft, an issue he said was already under litigation. The US military is currently an all-volunteer force, but young men still are required to register in case the draft is reactivated.

Asked whether the decision opened the door to women being required to serve in front-line combat positions, Mr Carter said members of the military have some choices but not "absolute choice".

"People are assigned to missions, tasks and functions according to need as well as their capabilities," he said. "And women will be subject to the same standard and rules that men will."

Mr Carter's decision drew a sharp rebuke from the Republican chairmen of the armed services committees in the Senate and House of Representatives, but some other lawmakers welcomed the move.

"Secretary Carter's decision to open all combat positions to women will have a consequential impact on our service members and our military's warfighting capabilities," Senator John McCain and Representative Mac Thornberry said in a statement.

They asked the Pentagon for details on a Marine Corps request for exceptions, which was overridden by Mr Carter, and information on how draft registration might be affected.

Two Democratic members of the armed services panels welcomed Mr Carter's decision. Senator Kirsten Gillibrand said it would "strengthen our armed forces" and Representative Niki Tsongas called it a "long overdue" move that would eliminate some of the barriers to advancement that women face in the military.

Mr Carter's decision comes nearly three years after the Pentagon first instructed the military to open all positions to qualified women, including front-line combat roles. A restriction on such roles was seen as increasingly out of place during a decade of war in Iraq and Afghanistan in which women were often in harm's way.

Women represented about 2 percent of U.S. casualties in Iraq and Afghanistan, with some 300,000 deploying to the conflict zones.

Since the Pentagon directive in 2013 the services have been examining whether women should be excluded from any military positions. Three women recently passed the rigorous Army Ranger course, but some 220,000 military jobs are still closed to women.

Mr Carter said most of the services favored opening all jobs to women, but the Marine Corps had sought a partial exception for roles such as infantry, machine gunner, fire support reconnaissance and others.

Mr Carter said he considered the Marine Corps' request and believed its concerns could be addressed with careful implementation of the decision.

Women already serve in combat roles for the armed forces of a few developed nations, including Canada and Israel, but officials say demand from women for such jobs in NATO nations is very low.