Colin David Picard, 69, faces being deported once he has served his 18-month prison sentence. 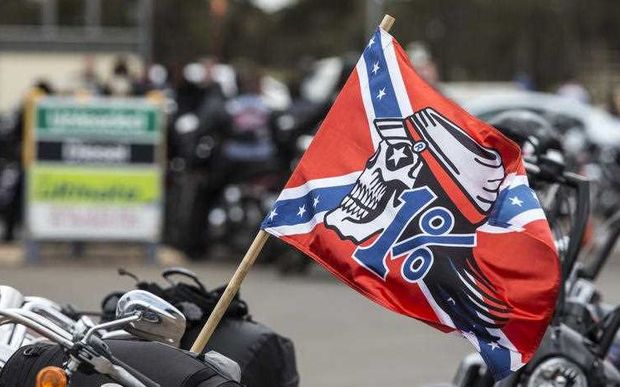 He is one of more than 200 bikies, drug traffickers and sex offenders whose visas were cancelled after changes to Australia's Migration Act gave the country's immigration minister more powers to deport people on "character" grounds. Under the changes, non-Australian citizens can be deported if they are sentenced to a year or more in prison, or convicted of a sexual offence against a child.

The immigration department decided there was a low risk of Picard reoffending but he was still an unacceptable risk to the community because of his affiliation with outlaw motorcycle gang members.

His lawyer James Forsaith argued in the Federal Court that Picard's links with the Rebels were not made clear to him when the immigration minister denied his application to stop his mandatory deportation.

"He wasn't aware that his riding with his mates affected his chances of rehabilitation," Mr Forsaith said on Wednesday.

He argued the former Tasmanian Rebels president and Launceston chapter boss should have been given a right of reply.

More information from Picard could have changed the outcome of his appeal, Mr Forsaith said.

"It might have been that the mates are part of branches that there are no criminal links."

Picard plans to ride Harley Davidson motorcycles with his Rebels "mates" once he is released because he doesn't have friends outside the club.

He is still in regular contact with Rebels members, with telephone calls and prison visits, the court heard.

Picard arrived from New Zealand in 1980. He was a Rebels member for 27 years and their president for more than a decade.

Counsel assisting the Commonwealth, Graeme Hill, said the department did not need to specifically ask Picard about his affiliation with the Rebels.

"If the matter is in the public domain, not controversial or is blindingly obvious - it (procedural fairness) is not necessary," Mr Hill said.

Justice Richard Tracey has reserved his judgment but will hand down his decision before the Christmas break.