Flimsy fishing boats carrying corpses are washing up in increasing numbers along Japan's coastline, and are suspected to have come from North Korea. 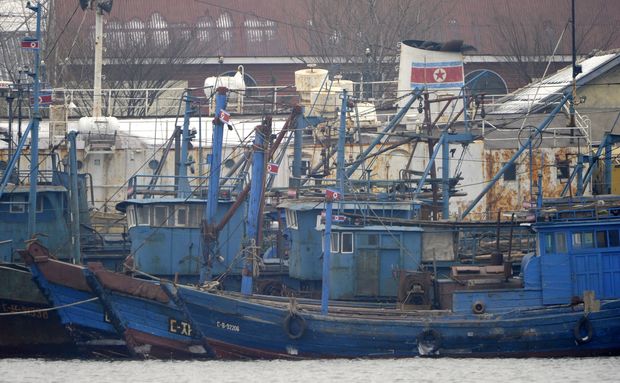 Twenty-two bodies on a dozen boats have washed up in the past month, some with badly decomposed bodies fuelling speculation they have strayed dangerously far from port under the impoverished nation's push to boost its catch.

There has been no mention from secretive North Korea of any missing boats, but its leader Kim Jong Un has put a high priority on fishing as a way of earning foreign currency and providing a sustainable food source without relying on harvests and weather.

The Japanese coastguard and police have reported 12 incidents of wrecked wooden boats, including some that were in pieces, on the country's shores and waters since October, containing 22 dead bodies including five skulls.

Japanese authorities declined to comment on the origins of the boats or the possible identities of the dead, but a handwritten sign identified one boat as belonging to Unit 325 of North Korea's army, according to footage from Japan's NHK Television. Tattered cloth found aboard the vessel appeared to come from the North Korean flag, the video showed.

Defectors and experts say fishing boats under the command of the Korean People's Army might have succumbed under pressure from Mr Kim to catch more fish and drifted off course, ill-equipped for rough seas.

TV images of some of the boats showed relatively large but otherwise primitive-looking motorised craft, and the coastguard said they did not have GPS navigation systems. Those aboard could have died of starvation and exposure to the cold after getting lost.

Although Japan's Meteorological Agency said the weather in the Sea of Japan this November was not unusually bad, the waters were rougher at this time of year due to the onset of cold, northwesterly winds.

October through February was also the prime season for squid, sandfish and king crab off the east coast of the Korean peninsula and it was not unusual to have high numbers of boats at sea, said Kim Do-hoon, a professor of fisheries science at Bukyong National University in Busan.

"Kim Jong Un has been promoting the fisheries, which could explain why there are more fishing boats going out," he said.

Fishing is a vital industry in a country where millions cannot find enough to eat. North Korea's 1.2 million-strong army is heavily engaged in food production, including fishing.