The suspect in a deadly gun attack on a Colorado family planning clinic said "no more baby parts" during his arrest, US media report. 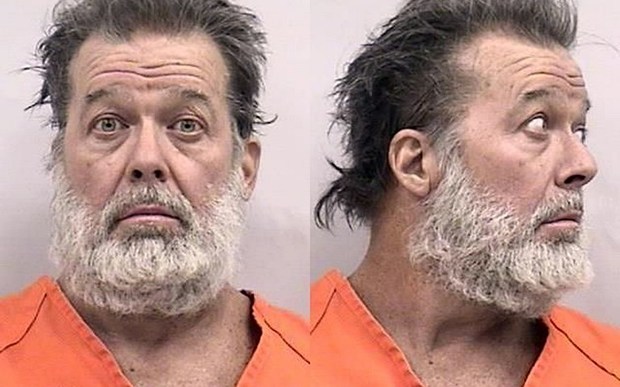 Witnesses say Robert Lewis Dear was motivated by opposition to abortion, according to Planned Parenthood, which runs the clinic in Colorado Springs.

Two civilians and a police officer died and nine other people were injured.

US President Barack Obama has renewed his call for tighter gun control, saying "enough is enough".

Mr Obama's gun control efforts have been opposed in Congress.

Mr Dear has been described as a loner who lived in a mountain cabin in North Carolina.

Police did not give details on the gun used but in a statement, Mr Obama described it as "an assault weapon" and talked of ending the "easy accessibility of weapons of war" on America's streets.

Mr Obama has previously said that his failure to pass "common sense gun safety laws" in the US is the greatest frustration of his presidency.

The suspect's remarks were quoted by an unnamed law enforcement official who spoke to the Associated Press news agency.

The Planned Parenthood group has drawn anti-abortion protests in the past.

Vicki Cowart, president and CEO of Planned Parenthood Rocky Mountains, said in a statement on Saturday: "Today, we are learning that eyewitnesses confirm that the man who will be charged with the tragic and senseless shooting that resulted in the deaths of three people and injuries to nine others at Planned Parenthood's health center in Colorado Springs was motivated by opposition to safe and legal abortion."

On Saturday, city police tweeted that they were searching a property linked to the suspect in the town of Hartsel, 105km west of where the shooting took place.

"If you talked to him, nothing with him was very cognitive - topics all over the place,'' said James Russell, who lives near the shack.

The dead police officer was named as Garrett Swasey, 44, who was married with two children.

Originally from Massachusetts, Mr Swasey moved to Colorado to pursue a career as a figure skater, and competed in national championships.

"He was a great dad," his father David told the Boston Globe. "Everybody in the police department loved him. Anybody who ever met him loved him."

The other two victims have not yet been named.

Colorado Springs Police Chief Peter Carey said five police officers were among the injured, who were being treated in local hospitals.

Planned Parenthood has been the focus of protests recently after an anti-abortion organisation secretly recorded one of its staff discussing how to obtain aborted foetal tissue for medical research.

Pro-life advocates say this proves Planned Parenthood is selling foetal parts for profit - which is illegal - but this is disputed by the organisation.

Who is Robert Lewis Dear?