A booby-trapped mass grave containing the bodies of at least 110 people from the minority Yazidi sect has been found in northern Iraq, officials say.

The grave was found close to the town of Sinjar after it was recaptured from Islamic State (IS) earlier in November.

IS captured Sinjar in August 2014, with reports of massacres and enslavement and rape of Yazidi women and girls.

This is said to be the sixth mass grave found in or near the town. 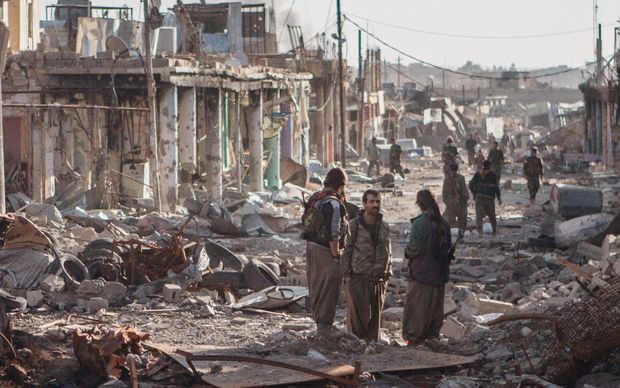 It was surrounded by bombs and has not yet been excavated. The estimate of the number of bodies inside comes from witnesses to the victims' executions.

Sinjar's mayor, Mahma Khalil, told the BBC this was the biggest of the mass graves found so far, though he expected further discoveries to be made.

He appealed to international organisations for help in compiling evidence for the International Criminal Court, of what he called IS's genocide of the Yazidis, who made up a majority of the population in the town.

Less than two weeks ago a grave was found which was thought to contain the bodies of about 80 women. Aged between about 40 and 80, they were deemed too old to enslave and rape, one official speculated.

Yazidis practise a form of religion which combines elements of Zoroastrianism and ancient Mesopotamian religions and are considered heretics by IS.

The UN has cited the Yazidis' treatment by IS as evidence that IS may have committed genocide and war crimes in Iraq.