An Australian man who saw his farm "explode in a fireball" on CCTV cameras at the property says his house survived because he used his phone to activate a sprinkler system from the other side of the country. 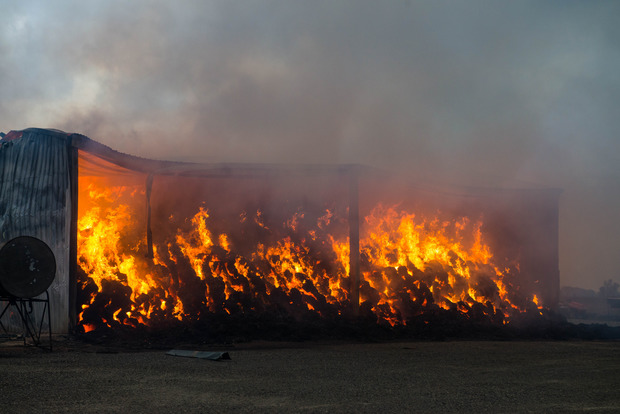 A hay shed burns on a property near Freeling in South Australia. Photo: AAP

Charles Darwin University vice chancellor Professor Simon Maddocks said the reason his house at the 45-hectare wheat farm on the outskirts of Hamley Bridge escaped the fire was because of his neighbours - and the fact he activated an irrigation system at the property by remote control from Darwin.

Two people have been confirmed dead and more than a dozen injured in the fires which continue to burn north of Adelaide.

"I'd been alerted by Country Fire Service (CFS) messages and friends that there was a fairly major fire in the district, a long way to the west of my place," Professor Maddocks said as he prepared to fly out of Darwin to Adelaide.

"At this time of year you are very conscious on strong windy days with warm temperatures, things can move quickly."

Watched my farm in SAust explode in fireball today - devastating bushfire - cameras let me see but helpless to act pic.twitter.com/9XwqeG8thq

Professor Maddocks, an agricultural scientist, said he was watching the CFS fire maps on his phone late yesterday and could see the firefront coming closer to his farm.

"I have my farm technologically connected, I can look at CCTV cams on my phone, I have irrigation systems on remote control," he said.

Despite the safety measures, Professor Maddocks said he could see "trees moving sideways in the wind" on the CCTV live feed.

"It was obviously horrendous conditions ... I could see a lot of smoke coming through."

Professor Maddocks said he watched as "all of a sudden everything went dark, then [there] was a red fireball ... everything just turned in a split second".

He said it took only "a matter of minutes" for the wheat crop to be engulfed.

"The firefront went through it ... in a matter of minutes the entire place was just gone," he said.

Fortunately, the house escaped, something Professor Maddocks said was thanks to the remotely activated sprinkler systems and the vigilance of his neighbours.

"The fire came up all around the house, but my ability to turn on irrigation systems from my phone in Darwin and the fact that I had neighbours patrolling with fire units, we're lucky we got away with a house."

Animals kept at the property also escaped harm, despite the shelters at the farm being seen on CCTV in flames, an image of which Professor Maddocks tweeted.

"We had horses, they're all okay."

He said he felt "helpless" as the drama unfolded on his CCTV feed.

"To suddenly watch your 15 years of labour of love just go to pot in front of your eyes is a bit surreal," he said.

"We couldn't have done anything ... when you know you're four-and-a-half hours across the country watching it by remote control, you feel so helpless."

Professor Maddocks said even if he had been at the property, he most likely would not have stayed.

"When a fire is moving that fast, even the professionals can't stop it ... even if we'd been there we probably would have evacuated."

Professor Maddocks, who lived at the property before his posting to Darwin in 2013, said he would begin the rebuilding process straight away.

"We're going into clean-up mode now and I guess then, we start again."