In northern Myanmar, dozens of people have been killed by a landslide of waste material from gold and jade mines. 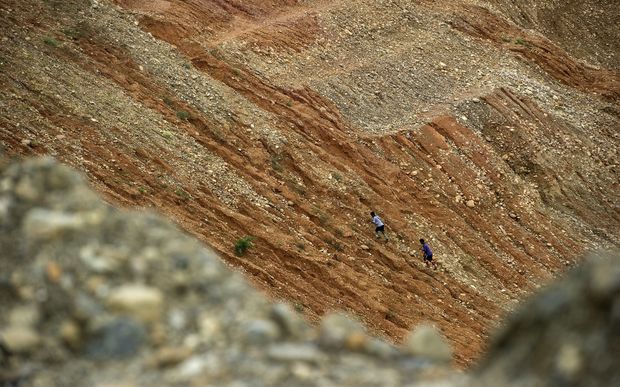 Freelance miners dig for jade in waste rubble dumped by a jade mine in Hpakant, Myanmar's Kachin State. Photo: AFP

A 300m pile of waste rock known as a spoil tip collapsed yesterday in Hpakant township in Kachin state, 350km north of Mandalay.

A local official said 75 bodies have been recovered so far and rescuers are trying to find 100 missing people. About 50 houses were destroyed.

Landslides are common in Hpakant, where as much as 90 percent of the world's jade is mined.

Earlier this year at least a dozen people were killed in a landslide near jade mines in the same area.

Hpakant is world's biggest jade mine

Jade mining companies connected to the army in Myanmar may have carried out "the biggest natural resources heist in modern history", according to the transparency campaigner Global Witness.

Its report claims jade valued at almost $US31 billion was extracted from Myanmar mines last year, and it estimates that the figure for the last decade could be more than $US120bn.

Asked about the figures in October this year, the government did not question the quantity or valuation of the jade but said most of the gemstones from the last year had been stockpiled, with only a small fraction sold so far.

At Hpakant, site of the world's biggest jade mine, huge articulated vehicles turn mountains into moonscapes as they claw the earth to find jade to feed China's multi-billion dollar demand.

To operate a mine in Hpakant you need military connections. The main companies listed in the Global Witness report are either directly owned by the army, or operated by those with close ties.

A few are run by those connected to ethnic armies, in return for them maintaining a ceasefire.