The US House of Representatives has passed a bill that tightens restrictions on the resettlement of Syrian and Iraqi refugees, amid security concerns.

Dozens of Democrats joined Republicans as the House passed the measure 289-137, in a rebuke to the White House.

President Barack Obama has said he will veto the legislation.

More on the global refugee crisis

The bill follows the attacks in Paris that left 129 people dead, claiming to the be the work of Islamic State.

Seven of the perpetrators died in the attacks, and one of them is thought to have been a Syrian who entered Europe via Greece with migrants.

It still needs to pass the Senate before hitting Mr Obama's desk.

The bill would require the head of the FBI, the Department of Homeland Security, and the Director of National Intelligence to sign off on each refugee as being "not a threat to the security of the United States", following an FBI background check.

Calling the Paris attacks "a game changer", Brad Ashford, a Democrat from Nebraska, said: "I cannot sit back and ignore the concerns of my constituents and the American public."

House Majority Leader Kevin McCarthy said he supported the bill because "it is against the values of our nation and the values of a free society to give terrorists the opening they are looking for".

Others urged compassion for those fleeing the war-torn regions.

"Defeating terrorism should not mean slamming the door in the faces of those fleeing the terrorists," said Jerrold Nadler, a Democrat from New York. "We might as well take down the Statue of Liberty".

The current vetting process in the US:

Republicans do not have the votes to override Mr Obama's veto, but say their affirmative vote is symbolic.

Rand Paul, a senator from Kentucky who is currently running for president, has highlighted a 2011 case in his home state of two Iraqi refugees who schemed to send rifles, missiles and money to al-Qaeda against US troops in Iraqi. They are now imprisoned. 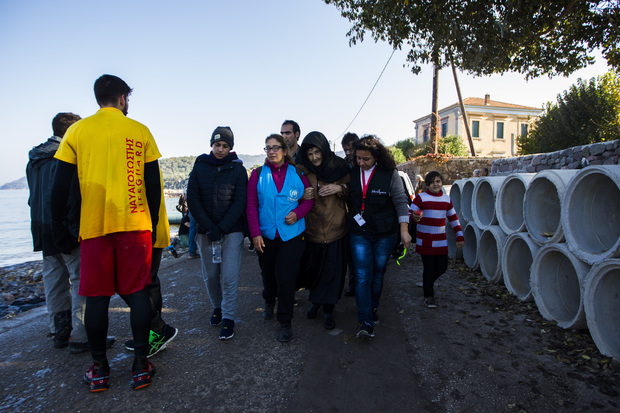 A woman from Syria receives assistance after arriving on the Greek island of Lesbos on 19 November. Photo: Tasos Markou / NurPhoto

The White House has said that 2174 Syrians have been admitted to the US since the attacks in September 2001, and noted that none of them has been arrested or deported for terror offences.

Millions of Syrians have fled to neighbouring countries and to Europe since the Syrian conflict began about four years ago.

The Obama administration announced in September that it wanted to resettle about 10,000 Syrian refugees in the US by the same time next year.

Another 150 Syrian refugees are also being included in the annual refugee quota.

Prime Minister John Key gave assurances this week that refugees who came to New Zealand were rigorously vetted before they are accepted.

Some Syrian New Zealanders had expressed fears of a backlash following the reports one of the Paris attackers might have posed as a migrant or refugee to enter Europe.

It was important to make sure refugees were welcomed to New Zealand, Mr Key said.

"The vast, vast overwhelming bulk of refugees are genuine refugees - actually, they go through a hell of a lot and we need to give them support.

"I'd certainly like to think that, the refugees we bring to New Zealand, we are going to embrace them as good genuine people and integrate them into our society."

A spokesperson for Immigration Minister Michael Woodhouse said on Monday there were no plans to change New Zealand's approach to screening refugees.