Refugees and migrants are likely to keep coming to Europe at a rate of up to 5000 per day via Turkey this winter, says the United Nations, meaning that more than a million people will have fled to the continent this year. 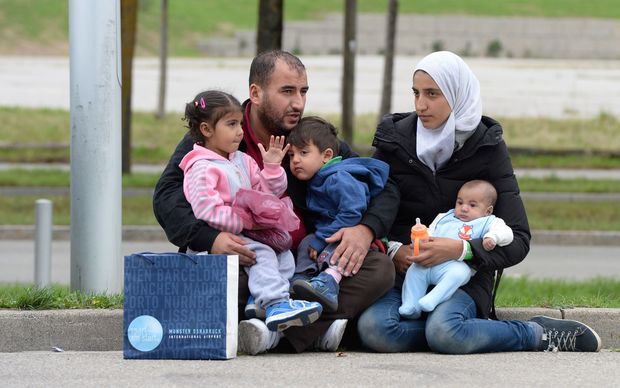 A refugee family from Syria waits in front of a exhibition hall at the Munich fairground that serves as makeshift shelter for migrants. Photo: AFP

About 760,000 people have already crossed the Mediterranean in 2015, mainly to Greece and Italy, after fleeing wars in Syria, Afghanistan and Iraq, as well as conflicts in Africa.

"We need to prepare for the possibility of up to 5000 to continue arriving every day from now until February next year. If that is the case, we are looking at another 600,000 refugees and migrants arriving in Europe between November this year and February next year," said William Spindler, spokesman for the UN High Commissioner for Refugees (UNHCR).

"It will put the figure over a million for this year."

In 2014, 216,000 people arrived in Europe by sea seeking asylum, a number matched by those arriving this October alone.

"If we don't take the necessary action, we fear that more people will die because ... of the harsh conditions of winter in Europe. We have already seen a number of shipwrecks off Greece and we are afraid that people might also die from exposure on the way between Greece and central and northern Europe," Mr Spindler said.

More than 3400 migrants have died trying to reach Europe this year by sea. On Thursday, one child drowned and another was missing off the Greek island of Kos after a boat carrying migrants sank, the coastguard said. 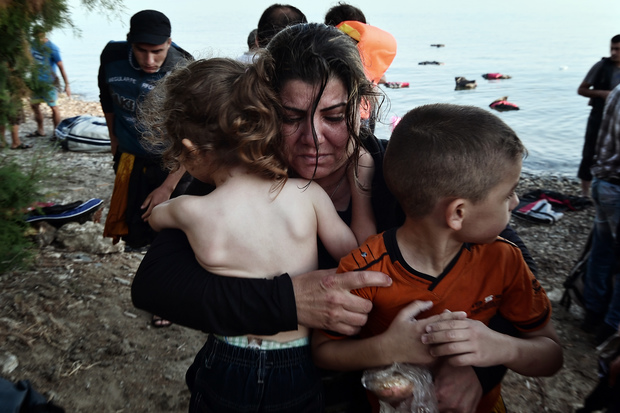 A Syrian woman holds her children as they arrive on an overcrowded dinghy on a beach near the port on the Greek island of Kos on 15 August. Photo: AFP

'Europe not dealing with crisis'

UNHCR is providing aid at over 40 sites in Greece, including 20 islands and islets, among them the main destination, Lesbos.

It is seeking an additional $US96.15 million to support Croatia, Greece, Serbia, Slovenia and Macedonia, bringing the total amount that it is trying to raise for Europe's biggest refugee crisis since World War II to $US172.7 million.

Mr Spindler criticised the failure of the European Union's member states to agree a comprehensive response.

"Europe has the means to deal with this situation but is not dealing with it," he said. "And now, aid agencies such as UNHCR and others are having to come to Europe to respond."

The fresh funds will be used to upgrade shelter and reception facilities for winter conditions, and to supply family tents and housing units equipped with heating.

Sanitation and water supply systems will be improved to provide hot showers, toilets, and laundry facilities. Transport may be provided if national authorities are unable to do so, to avoid people having to walk in the cold to reach registration points.

It urged donor states to allocate funds "as flexibly as possible" as the routes taken by the refugees were continually changing.

The European Commission said three million migrants were likely to arrive in Europe by 2017 as the record influx via the Mediterranean continued.

The EU's executive arm said the influx would have a "small but positive" effect on EU economic output, raising GDP by 0.2-0.3 percent.

The influx will raise the EU population by 0.4 percent, the Commission forecasts, taking account of failed asylum claims.

Delivering the EU's autumn economic forecast, EU Economic Commissioner Pierre Moscovici said extra public spending and the extra labour supply from recognised refugees would lead to a small GDP rise in the EU as a whole.

However, the Commission cautioned that "the uncertainty surrounding the influx thus far and its future development is substantial".

Commenting on the three million figure given by the Commission, UK Independence Party (UKIP) leader Nigel Farage said "nothing illustrates the need to be out of the EU and to restore proper border controls more than this dire prediction".

The UKIP said that inside the EU the UK was powerless to stop immigration from other EU countries.

The Commission said the figure of three million was an assumption rather than a prediction and included those who had already arrived in 2015.