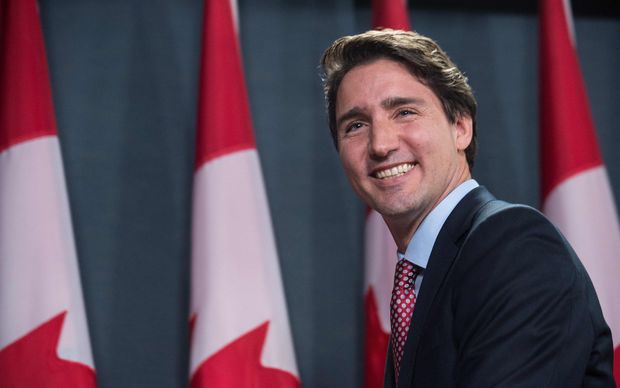 His ascension marks a new era of Liberal politics after an election that saw Stephen Harper's party ousted.

Mr Trudeau, 43, follows in the footsteps of his father who held the office for nearly two decades.

Mr Trudeau whispered "I love you" to his family upon being sworn in.

The new ministers, who are are mostly aged between 35 and 50, took their oaths in the bilingual ceremony.

Trudeau's cabinet features an equal number of women and men, with the new PM touting his team's diversity.

After the ceremony, a reporter asked Mr Trudeau why having a gender-balanced cabinet was so important.

The prime minister replied, "Because it's 2015," and then shrugged to wild applause.

The former school teacher turned politician was elected to parliament in 2008, and becomes the second youngest prime minister in Canadian history.

He was elected after running on a plan to reject austerity and spend billions on infrastructure projects that would see Canada run a deficit for three years.

The plan caught the attention of a Canadian electorate hungry for change after a decade under the rule of Prime Minister Harper.

The conservative prime minister was also angered by Mr Obama's reluctance to approve the Keystone XL pipeline that was designed to transport petroleum from Alberta to Texas.

For his part, Mr Trudeau believes the pipeline should be approved, but does not think that that the disagreement should weigh so heavily on US-Canada relations.