At least 16 people have been killed in the Pakistani city of Lahore after a factory under construction collapsed, officials say. 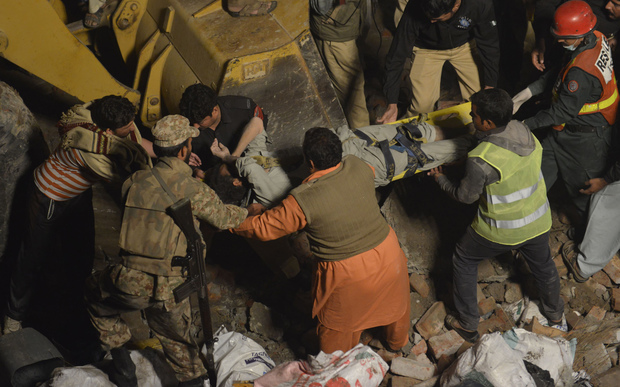 A person is rescued from the rubble Photo: AFP

Emergency services are worried that as many as 150 workers could be trapped under the rubble. A major rescue operation is under way.

Cries for help from under the debris at the factory could be heard at the site, officials told The Express Tribune.

Two floors were operational while a third was being built.

The factory - used to make shopping bags - is located in the Sundar Industrial Estate on the outskirts of the city.

The Dawn newspaper reported that some under-age workers were employed there although this has not been officially confirmed.

Rescuers said they extricated some of those buried under the debris. State-run TV said 45 injured people were sent to different hospitals in the area.

The army said it was deploying a team of engineers and experts to take part in the rescue.

The emergency services said the relief operation was being made more complicated because they were using heavy machinery which could injure the survivors.

Rescue worker Jam Sajjad Hussain told AP that as many as 200 workers were inside the building when it collapsed, although other estimates in the Pakistani media have put the figure closer to 150 people.

Building safety levels are often below standard in Pakistan.

In September last year at least 24 people were killed in Lahore when the roof of a mosque collapsed.

At least 17 people - including children - were killed in a factory collapse following a gas explosion in a residential area of the city in February 2012.