The Rosetta spacecraft has detected significant levels of molecular oxygen coming from Comet 67P/Churyumov-Gerasimenko, in a discovery that has taken astronomers by surprise.

The discovery, reported in the journal Nature, may provide new clues about the conditions and environment where the Earth, the Sun and solar system were born 4.6 billion years ago. 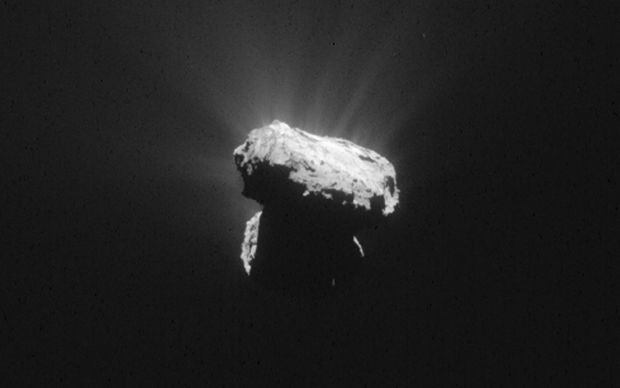 "This is the first comet that we've found which has molecular oxygen," said the study's lead author, Dr André Bieler of the University of Michigan.

"The detection of molecular oxygen is new and very surprising. This was a very strong signal indicating that we found a lot of it."

The cloud of gas - or coma - surrounding a comet is known to be dominated by water, carbon monoxide and carbon dioxide, together with trace amounts of other chemicals.

Dr Bieler and colleagues found the ratio of molecular oxygen to water in the coma of Comet 67P averaged about 3.8 percent.

"We detected this molecular oxygen very early on in the mission - more than a year ago - and were very surprised," Dr Bieler said.

"No-one expected this to happen so we didn't want to publish anything right away.

"We decided to keep monitoring this molecular oxygen signature until we were sure we understood what was happening."

Why does 67P contain oxygen?

For Dr Bieler and colleagues, the big question now is trying to explain why Comet 67P contains molecular oxygen.

"Comets lose between one and 10 metres of their surface material during each orbit around the Sun," Dr Bieler said.

"Because Comet 67P has been around for quite a while, we estimate that it's lost hundreds of metres of its surface material."

This means that either the molecular oxygen is being constantly produced on the comet's surface, or it is embedded throughout the comet. 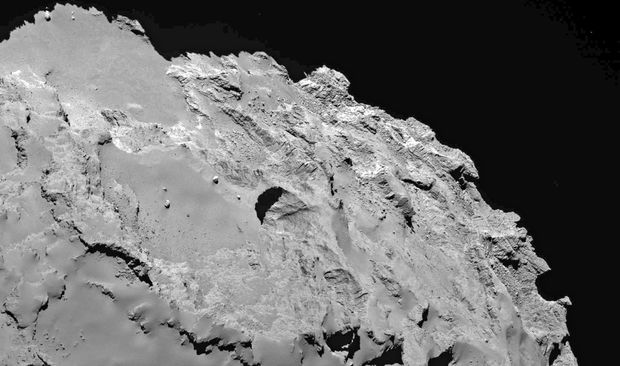 Dr Bieler and colleagues speculated that molecular oxygen could be generated by energy from the Sun affecting the molecular bonds of water molecules on the comet's surface.

This scenario would have caused changes in the ratio of molecular oxygen compared to water, depending on which part of the comet was facing the Sun.

The researchers concluded the oxygen was embedded throughout the whole body of comet and was one of the materials from which the comet was made.

"We think the one way this could have happened is if the molecular cloud that formed our solar system contained molecular oxygen, which could then be incorporated into the composition of the comet," Dr Bieler said.

What does this tell us about our solar system?

Previously, molecular oxygen has only been found in star-forming clouds that are about 20° warmer than the usual minus 253° to minus 243° celsius.

"This could mean that our solar system was not very typical in how it formed, but had warmer temperatures giving it an elevated abundance of molecular oxygen in a gaseous phase, which was later incorporated into the comet," Dr Bieler said.

Dr Bieler and his colleagues are now working to determine if molecular oxygen can be detected in other comets.

"We're examining some 30-year-old data from the Giotto spacecraft's encounter with Comet Halley to see if we can find hints of molecular oxygen," he said.

"Those instruments won't able to resolve molecular oxygen, but maybe we'll find something that will indicate its presence in some indirect way."