Taiwanese marine biologists have discovered a mass of plastic bags and fishing net in the stomach of a dead whale, underlying the dangers posed by floating ocean trash. 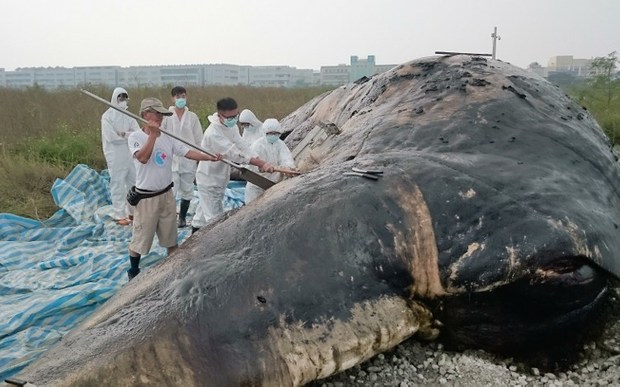 An autopsy on the whale discovered a mass of rubbish. Photo: AFP/Mareine Biology and Cetacean Research Centre of National Cheng-Kung University

The 15-metre mature sperm whale was spotted stranded off the southern town of Tongshi on October 15.

Coastguards and scientists returned it to the ocean but three days later it was found dead about 20 kilometres away.

Marine biologists from a local university, who conducted an autopsy over the weekend, found a mass of plastic bags and fishing net sizeable enough to fill an excavator bucket.

Professor Wang Chien-ping, head of the Whale Research Centre at National Cheng-Kung University, said the rubbish was probably a major factor in the death.

He said the whale could have suffered heart or lung disease and multiple infections.

"But ... the large amount of man-made garbage in the stomach could reduce its appetite and cause malnutrition. It was likely a critical cause of death," he said.

The Society of Wilderness said the case highlighted the growing threat from ocean trash.

"We frequently heard of marine animals killed after swallowing lots of garbage, but this one was the biggest in size for many years," said He Chih-ying, spokeswoman for the conservation group.