The strongest hurricane ever recorded in the Americas has made landfall on Mexico's Pacific coast but is weakening as it moves north-northeast across the country. 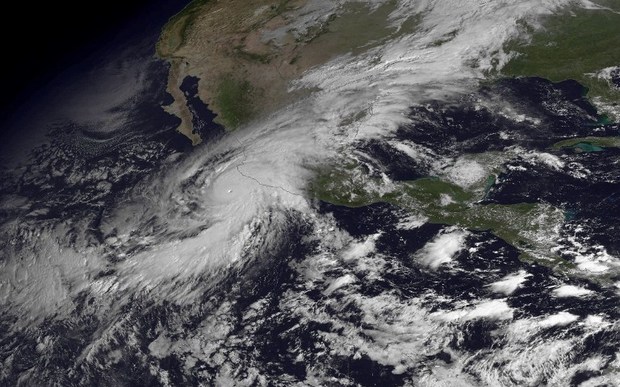 Mexican authorities have been evacuating thousands of residents and tourists and a state of emergency has been declared in three states in Hurricane Patricia's path.

The United States National Hurricane Center in Miami said the category five hurricane hit Jalisco state west of the major port of Manzanillo with winds of 265 kilometres an hour. 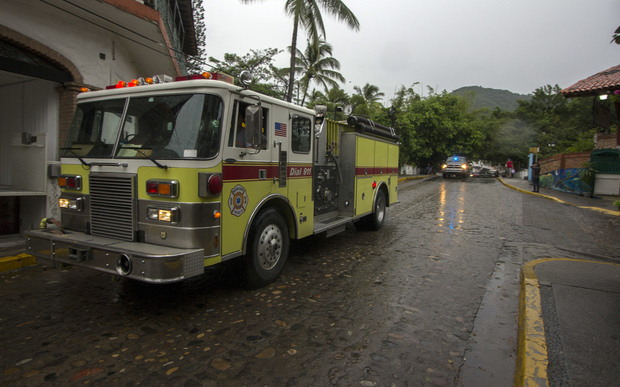 Firemen assemble ahead of the storm. Photo: AFP

It was packing maximum sustained winds of 270 kilometres an hour when it struck land.

Hours earlier, the hurricane peaked with winds of 325kph, stronger than the Super Typhoon Haiyan, which left thousands of people dead or missing when it struck The Philippines in 2013.

However, Patricia has now been downgraded to a category four hurricane, with maximum winds close to 215kph as it moves north-northeast.

Calls for donations for recovery effort

Save the Children Mexico is calling on people to begin to donate to its recovery operation that will be required in the areas struck by Hurricane Patricia.

Telecommunications were down in some coastal communities and most of the tourists have been evacuated, he said.

According to a government spokesperson, about 19,000 people have been evacuated and there are about 1800 temporary shelters active throughout the three states to protect local citizens.

Mr Caswell Pérez said he has been told up to 400,000 people could be affected.

"We do hope that coming into land it does weaken considerably otherwise we do expect a significant part of the population will have major damages to their homes.

"Save the children are working to ensure that there are child-friendly spaces where they are safe and protected while the parents are assessing the damages."

He said at the moment people are evacuating their homes in an orderly fashion, but are shocked at just how quickly the hurricane formed and some reports have people comparing it to an atomic bomb.

Save the Children New Zealand said they were waiting to hear from their Mexican counterparts about what resources were needed before mobilising their response.

The Ministry of Foreign Affairs and Trade is urging New Zealanders in Mexico to keep safe and follow any evacuation and other instructions issued by the Mexican authorities.

It says 49 New Zealanders are currently registered as being in Mexico.

At least 15,000 tourists have been evacuated, including Amara Bessa who had to leave the coastal resort town of Puerto Vallarta.

"I raced over to the market here first thing in the morning and everybody at the resort was doing the same thing - to get food and water and make sure that we would have something."

She said the authorities told everyone to meet in the lobby at a certain time and then they evacuated everybody out of the building.

The US National Hurricane Center said on its website: "Potentially catastrophic Hurricane Patricia moving northward toward landfall in south-western Mexico."

The centre added that it was the strongest storm it had recorded in the eastern Pacific or the Atlantic.

Some 400,000 people live in vulnerable areas, according to Mexico's National Disaster Fund.

The hurricane, which will bring torrential rain, could trigger flash floods and mudslides, the US centre said.

It also warned of potential flooding from the sea and destructive waves.

The hurricane's winds are strong enough "to get a plane in the air and keep it flying", World Meteorological Organization spokeswoman Claire Nullis said.

What is a hurricane?

According to forecasters, Patricia will make landfall in the western state of Jalisco, home to the resort town of Puerto Vallarta, which could lie directly in its path.

Police patrols in the resort urged people to leave the shorefront for safer areas at least three blocks inland, while loudspeakers ordered hotel residents to evacuate.

Few people were seen going to official shelters, designed to accommodate 259,000 people, though there were queues at the local bus station.

The town's airport, along with two others in the path of the storm, were closed.

Schools have been closed in Jalisco, Colima and Guerrero states.

Shop owners in Manzanillo, a major port in neighbouring Colima state, have begun boarding up windows.

Residents have also begun stocking up on food and other supplies.

Heavy rains often lead to flooding in the town, said Alejandra Rodriguez, who was shopping at Wal-Mart in Manzanillo with her brother and mother.

Some rural areas are prone to landslides and flooding. The government has warned that ash from the nearby Colima volcano, which has become increasingly active this year, could combine with heavy rainfall to trigger huge mudflows.

Mexico has to deal with tropical storms arriving from both the Pacific and Atlantic oceans at this time of year.