Former Australian cricket captain Ricky Ponting has told the court in Chris Cairns' perjury trial he was with Brendon McCullum when the Black Cap got a call from Cairns about a business proposal.

Cairns is on trial at Southwark Crown Court in London accused of lying under oath about match-fixing during another court case.

McCullum says Cairns approached him twice, once in India and once in England, to fix cricket games in 2008.

The prosecution has said Ponting's evidence is inconclusive but it dovetails with McCullum's account that he was with the Australian before Cairns' first approach. 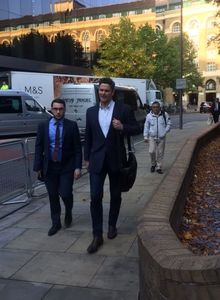 Ponting told the jury he had been sitting in a bar in India with McCullum, his Kolkata Knight Riders team mate, when the New Zealander had a five minute phone conversation with Cairns.

Ponting said McCullum told him after hanging up that it was "Cairnsy" and he had made him a business proposition.

He told the jury that as soon as he heard it was about business he was not interested any more and did not ask McCullum further questions.

Under cross-examination, the defence questioned Ponting and McCullum's friendship.

The court heard the Australian wrote a forward for a book of McCullum's and knew him reasonably well.

Ponting also told the court they shared an interest in horse racing and gambled on the horses, and that was why his nick name was "Punter".

Mr Pownall asked whether Ponting would describe McCullum as naive or vulnerable, to which he answered "no".

The defence also asked Ponting if he would have reported Cairns to authorities if he had been approached. Ponting answered that yes, he would have.

It took McCullum two and a half years to report Cairns, which has become a point of attack for the defence. McCullum has said he regrets not filing a complaint sooner but did not because he, "didn't want to rat" on his boyhood hero.

The court also heard that the first time Ponting was asked to recall the events of 2008 was in June 2014. When asked under re-examination by Sasha Wass QC whether he remembered the incident correctly he said he was "100 percent sure," and would not have put it in a witness statement otherwise.