Jamaican author Marlon James has won the Man Booker Prize for his novel inspired by the attempted assassination of Bob Marley in the 1970s. 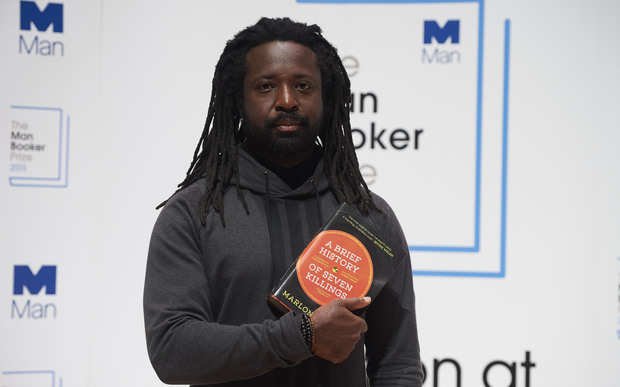 Marlon James has won the Man Booker prize for his novel 'A Brief History of Seven Killings' Photo: AFP

Michael Wood, chair of the judges, described 'A Brief History of Seven Killings' as the "most exciting" book on the shortlist.

The 680-page epic was "full of surprises" as well as being "very violent" and "full of swearing".

James was announced the £50,000 winner on Tuesday night at London's Guildhall.

Receiving the prize, he said a huge part of the novel had been inspired by reggae music.

"The reggae singers Bob Marley and Peter Tosh were the first to recognise that the voice coming out our mouths was a legitimate voice for fiction and poetry."

The 44-year-old author was presented with his prize by the Duchess of Cornwall.

He admitted it was "so surreal" to win and dedicated the award to his late father who had shaped his "literary sensibilities".

Set across three decades, the novel uses the true story of the attempt on the life of reggae star Marley to explore the turbulent world of Jamaican gangs and politics.

Wood said the judges had come to a unanimous decision in less than two hours.

He praised the book's "many voices" - it contains more than 75 characters - which "went from Jamaican slang to Biblical heights".

He said: "One of the pleasures of reading it is that you turn the page and you're not quite sure who the next narrator will be."

"Someone said to me they like to give Booker winners to their mother to read, but this might be a little difficult."

Wood admitted his own mother wouldn't have got beyond the first few pages on the basis of the swearing.

"A lot of it is very very funny," he added. "It is not an easy read. It is a big book. There is some tough stuff and there is a lot of swearing but it is not a difficult book to approach."

In his novel's acknowledgements, Marlon James himself thanks his family but adds: "This time around maybe my mother should stay away from part four of the book".

This is the second year the Man Booker prize has been open to all authors writing in English, regardless of nationality. James is the first Jamaican author to win the Man Booker Prize. 'A Brief History of Seven Killings' is his third novel.

James, who currently lives in Minneapolis, US, can expect a dramatic boost in sales following his win. After 'A Brief History of Seven Killings' was named on the Booker shortlist last month sales tripled to more than 1,000 copies a week, according to Nielsen Book Research.

"It's a visceral and uncompromising novel that sheds a stark light on a profoundly disturbing chapter of Jamaica's history, but it's also an ingeniously structured feat of storytelling that draws the reader in with its eye-catching use of language," said Jonathan Ruppin, web editor at Foyles bookshops.

"For booksellers, it's truly heartening to see such ambition and originality recognised and rewarded, and readers have already been embracing it with great enthusiasm."

This year's Man Booker shortlist featured two authors from the UK, two from the US and one each from Jamaica and Nigeria.