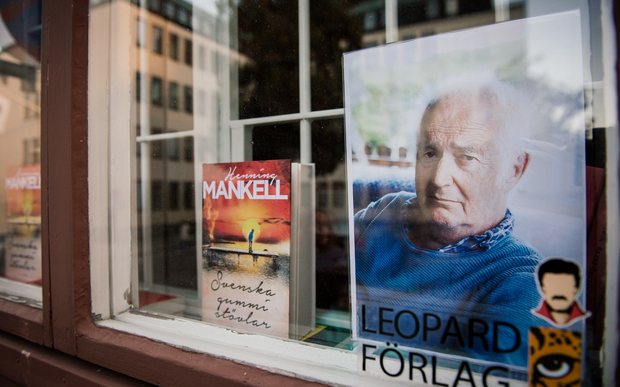 A picture of Swedish crime writer Henning Mankell and copies of some of his books are displayed inside a window of a Swedish publishing company. Photo: AFP

The author discovered he had cancer last year, and wrote about the experience in his last book, Quicksand: What It Means To Be A Human Being.

His best-selling novels, which follow policeman Kurt Wallander through Sweden and Mozambique, were turned into a TV drama starring Sir Kenneth Branagh.

In a statement, Sir Kenneth said: "In life and in art Henning Mankell was a man of passionate commitment. I will miss his provocative intelligence and his great personal generosity. Aside from his stringent political activism, and his decades of work in Africa, he also leaves an immense contribution to Scandinavian literature."

Born in February 1948, Mankell wrote dozens of plays, novels, children's books and screenplays. But it was for his Wallander series that he was most renowned.

The rumpled and gloomy detective got his name when Mankell ran his finger through a telephone directory, and went on to sell more than 40 million books.

Mankell's life and career were shaped by the divorce of his parents when he was just two years old. He lived with his father, a judge, and barely saw his mother until he was 15.

When the family moved to a remote town in the north of Sweden, the young Mankell immersed himself in books, reading extensively about Africa, and learned that imagination could be an instrument of survival, not just of creativity.

"In my mind I created another mother for myself to replace the one who had left," he once said. "And I think this was me at my best, when the forces of imagination had the same value as the real world."

Unimpressed by school, he left at the age of 16 to join the merchant navy, becoming a stevedore labourer on a Swedish ship carrying coal and iron ore. Two years later, he set up home in Paris, barely scraping a living ("I don't know how I survived," he said) but thriving on the student activism and political debate.

After a year and a half, he returned to Stockholm to work as a stagehand. There, aged 20, he wrote his first play, The Amusement Park, about Swedish colonial interests in 19th Century South America. His debut novel, The Stone-Blaster, soon followed.

Kurt Wallander first appeared in 1989's Faceless Killers, investigating a murder in which the only clue is that the perpetrators appear to have been foreigners. When that information was leaked to the public, it triggered a series of racially-motivated attacks, explored in the book through the themes of racism and national identity in Sweden.

At first, the author was unaware he had created a recurring character, "but then I realised after two or three novels that I had this… instrument who could be useful".

Speaking to the Telegraph in 2011, he said: "I wanted to show how difficult it is to be a good police officer. But after, I think, the third novel, I spoke to this friend of mine and asked what sort of disease I could give him. Without hesitating, she said: 'Diabetes!' So I gave him diabetes and that made him more popular.

"I mean, you could never imagine James Bond giving himself a shot of insulin, but with Wallander it seemed perfectly natural."

Although he became known as a leading proponent of "Scandi Crime", Mankell was not a fan of genre fiction.

"I could never write a crime story just for the sake of it, because I always want to talk about certain things," he said, citing Macbeth as the best crime story he had ever read, and John Le Carre as a key influence.

"He investigates the contradictions inside man, between men, and between man and society; and I hope to do the same," he told The Guardian.

Throughout his adult life, Mankell divided his time between Sweden and Mozambique, where he ran a theatre company and devoted time to the fight against Aids.

He was active in the "memory books" project, which encourages parents with HIV to record their stories, not just for their children but for future generations.

Shortly after New Year 2014, the author went to see an orthopaedic surgeon in Stockholm with what he assumed was a slipped disc. But tests revealed a tumour in his lung, another in his neck, and evidence the cancer had spread throughout his body.

"It was a catastrophe for me," he told US radio station NPR last year. "Everything that was normal to me up to that point was gone all of a sudden. No one had died of cancer in my family. I had always assumed I'd die of something else."

His survivors include his wife of 17 years, Eva Bergman - the daughter of Ingmar Bergman's second wife, the dancer Ellen Lundstrom - and his son, Jon Mankell, a film producer who helped bring Stieg Larsson's Girl With The Dragon Tattoo series to the big screen.