Political leaders in Germany are airing the possibility of limiting the number of Middle East refugees it can take in and the prospect of closing its border.

Around 800,000 migrants are expected to arrive in Germany this year and complaints from politicians, the federal states and the municipalities that they cannot cope are growing. 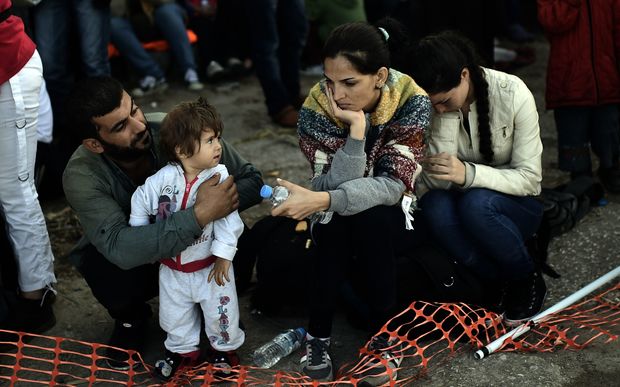 Refugees and migrants rest after arriving at the Greek island of Lesbos Photo: AFP

While German Chancellor Angela Merkel is still saying the door is open, her Finance Minister Wolfgang Schaeuble is calling for Europe to restrict the refugee intake.

"We need to limit the influx to Europe," Mr Schaeuble said, adding this was a European task and that Germany, the European Commission and others were working hard on it.

"The EU will do that very quickly now, above all with Turkey," he said, without giving any further details.

And members of the Christian Social Union in Bavaria want Germany to temporarily shut its borders while it considers its options.

Amost 7,000 refugees arrived in Bavaria alone on Friday last week, followed by another 6,000 on Saturday.

Schaeuble said: "Europe needs to be prepared to take people in... but we can't do what is impossible."

More than half a million migrants have entered the European Union this year. Some are eligible to claim asylum, for example those fleeing Syria's civil war. Others, notably from the western Balkans, are generally considered economic migrants who must return home.

On Germany, which is the favoured destination for many migrants, Schaeuble said: "We can't manage this task at a national level any more."