The gunman who killed nine people in a shooting rampage at a college in the US state Oregon then killed himself as police arrived, officials have said. 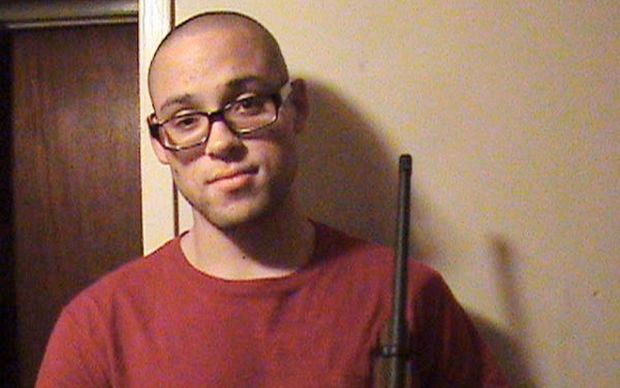 At a news conference in Roseburg, they revealed that Chris Harper Mercer, 26, was enrolled in the class where the shooting took place.

They also said that 14 weapons were later found at his home.

Police earlier released the names of the victims, who ranged in age from 18 to 67. The oldest was a teacher.

President Barack Obama on Friday expressed his anger at gun violence, calling on the public to press their politicians to support reform.

"The medical examiner has determined the cause of death of the shooter to be suicide," Douglas County Sheriff John Hanlin told reporters on Saturday.

He said that investigators were checking numerous leads and had already interviewed hundreds of people in the area.

On Thursday, Mercer - dressed in a flak jacket - brought six guns to Umpqua Community College in Roseburg and opened fire.

The attacker killed eight students and a teacher.

He then killed himself after a gun battle with police officers who arrived at the college.

The gunman also reportedly left a "manifesto" - a typed statement that was several pages long. Officials did not reveal the content of the note.

Mercer's relatives on Saturday released a statement, saying they were "shocked and deeply saddened by the horrific events".

"Our thoughts, our hearts and our prayers go out to all of the families of those who died and were injured," the statement said.

When asked about his son's mental health, his father Ian Mercer told CNN on Saturday that he "has to have some kind of issue".

It is unclear why Chris Harper Mercer carried out the killings. Two victims have said religion was an issue - the gunman asked his victims to state their religion and shot dead the Christians.

He enlisted in the army in 2008, but was discharged after less than a month in basic training, for reasons unknown.

Meanwhile, survivors have been telling their stories of the horrific events on Thursday.

Medicine student Sharon Kirkham told the BBC her friend Kim died in her arms after being shot three times.

"I heard her gasping for air, but I couldn't save her," she said.