Officials from several countries have said that the death toll in last week's stampede near Mecca was higher than Saudi authorities have officially listed. 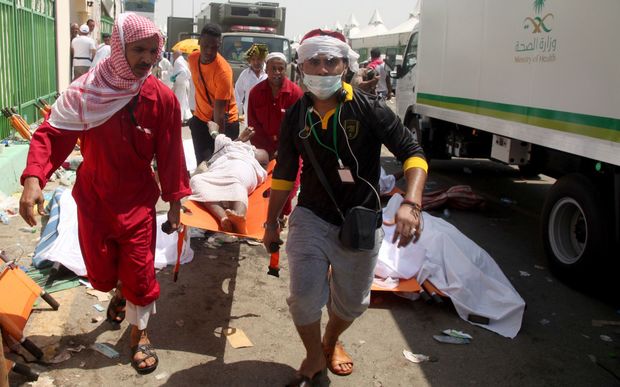 Saudi emergency personnel and Hajj pilgrims carry a wounded person at the site where hundreds were killed in a stampede in Mina, near the holy city of Mecca. Photo: AFP

Indian, Pakistani and Indonesian officials have been quoted as saying they think more than 1000 died in the crush during the annual Hajj pilgrimage. And a Nigerian official told the BBC 1000 bodies of victims had been taken to morgues in the city of Jeddah.

The Saudi authorities say 769 died in the crush and insist the higher figure is for all deaths at this year's Hajj.

Pakistani and Indonesian officials have also indicated that they have been sent more than 1000 such images.

A Saudi interior minister spokesman told AP that this number included 109 people who died at the Grand Mosque when a crane collapsed on 11 September and all other deaths at this year's pilgrimage, some of them from natural causes.

A Nigerian Hajj official from Kano, Abba Yakubu, said he had been to Jeddah, where the dead from Thursday's crush are being processed.

Mr Yakubu said that in total, 14 lorries carrying bodies were brought to the city. He added that so far 1,075 bodies had been offloaded from 10 lorries and taken into the morgues. Four lorries had yet to be dealt with, he said.

Several countries have been severely critical of the way the Saudi authorities have handled the accident's aftermath, notably Saudi Arabia's regional rival Iran, which lost at least 228 people in the disaster.

Thursday's stampede was the deadliest incident to hit the Hajj in 25 years.

The crush occurred on Thursday morning as two large groups of pilgrims converged at right angles as they took part in the Hajj's last major rite - stone-throwing at pillars called Jamarat, where Satan is believed to have tempted the Prophet Abraham.

As well as the fatalities, 934 people were injured.

King Salman has ordered a safety review into the disaster.

Deaths reported so far by nationality