US President Barack Obama and Chinese President Xi Jinping have said they will take new steps to address cybercrime. 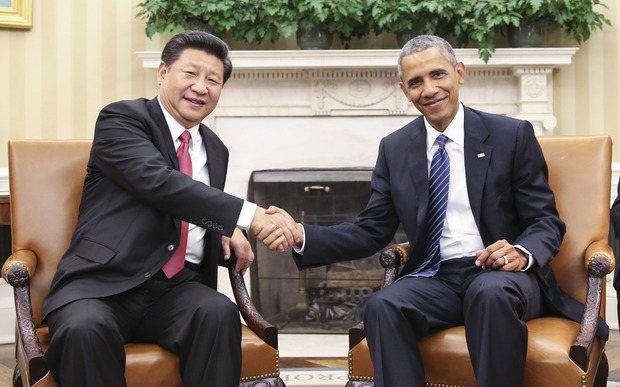 Speaking at a joint news conference at the White House, Mr Obama said they had agreed that neither country would engage in cyber economic espionage.

The deal covered the theft of trade secrets but not national security information.

Mr Obama said any escalation in China's alleged cybercrimes against the US would prompt sanctions.

"It has to stop," he said. "The question is now, are words followed by action?"

Reflecting on the use of sanctions against either individuals, businesses or state-run companies, he said: "We will apply those, and whatever other tools we have in our tool kit, to go after cybercriminals either retrospectively or prospectively."

Both countries denied taking part in the cybertheft of commercial secrets.

The Chinese president said the two countries would not "knowingly support" such practices and said they would both abide by "norms of behaviour" in cyberspace.

"Confrontation and friction are not the right choice for both sides," said Mr Xi, speaking through a translator.

The cybertheft of intellectual property designed to benefit Chinese industry was described by former National Security Agency Director Keith Alexander as "the greatest transfer of wealth in history".

US officials have alleged that the Chinese state was behind a massive data security breach of government databases as well as attacks on private firms. That kind of breach is not covered by this deal.