Four men, three of them pensioners, have pleaded guilty to being part of a daring raid in London's jewellery business district over Easter. 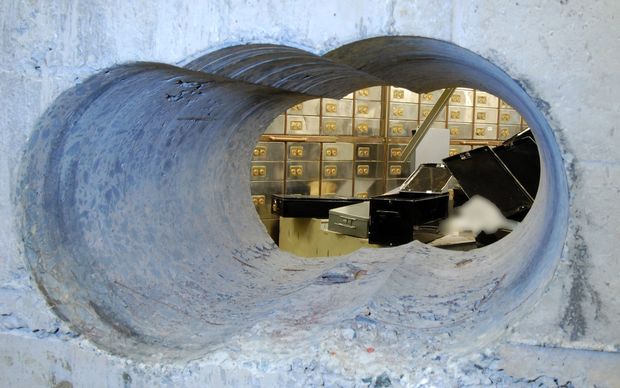 The men, aged from 58 to 76, admitted in court to conspiracy to burgle the Hatton Garden Safety Deposit building over the holiday weekend in April.

Five others denied the charges and will go to trial.

Items worth more than $NZ25.5 million were stolen when intruders broke into the vault where many of the area's gold, diamond and jewellery businesses kept stock.

The burglars broke into an elevator shaft, abseiled down to the vault then used heavy cutting equipment to get through a thick concrete wall.

Perkins, Collins, Jones and Reader were arrested in May.

They pleaded guilty to conspiracy to burgle, namely to enter Hatton Garden Safe Deposit in London with intent to steal, between 1 January and 7 April.

The four men also faced a charge of conspiracy to convert or transfer criminal property, but the prosecution said they would not pursue the charge in light of the men's guilty pleas in relation to the conspiracy to burgle charge.

The men will be sentenced at a date to be confirmed.

Earlier this month a law firm confirmed the Hatton Garden Safe Deposit had gone into liquidation as the company was insolvent and "owes money to companies and people".

After the burglary, police launched an investigation into why after police were made aware an intruder alarm had gone off at the scene of the raid it was decided the alarm did not require a response.

Police apologised for not following procedures and said it would investigate why the call was given a grade that meant no police response was deemed necessary.

Five other men still face trial accused of conspiring to commit the burglary, a charge they denied.

Hugh Doyle, 48, William Lincoln, 60, and John Harbinson, 42, all also denied the laundering offence and were due to stand trial in November.

Perkins' daughters also appeared in court, along with their husbands, accused of conspiracy to convert or transfer criminal property between 1 January and 19 May.

Four others were also charged in connection with the raid last month.