French prosecutors have said they believe "with certainty" that a wing part found on Reunion Island in July came from missing flight MH370. 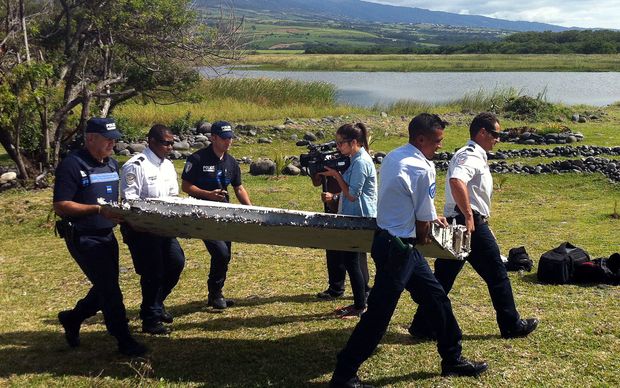 Police carry a piece of debris from an aircraft found in the coastal area of Saint-Andre de la Reunion, in the east of the French Indian Ocean island of La Reunion. Photo: AFP

The wing section, known as a flaperon, had been examined in France by international aviation experts.

French authorities launched searches on and around Reunion for more debris after the flaperon was discovered.

The Malaysia Airlines plane - carrying 239 people - veered off its course from Kuala Lumpur to Beijing in March 2014.

The Malaysian government had previously said it believed that the flaperon belonged to MH370.

Prosecutors in Paris, who had until now been more cautious on the provenance of the debris, said a technician from Airbus Defense and Space (ADS-SAU) in Spain, which had made the part for Boeing, had formally identified one of three numbers found on the flaperon as being from MH370.

The families of those aboard - who were mostly Chinese - have been angered by the apparent discrepancies in statements by French and Malaysian officials, and have accused the authorities of hiding the truth.