People in the Chinese city of Tianjin whose homes were damaged by the huge explosions at on 12 August have staged protests to demand compensation from the government. 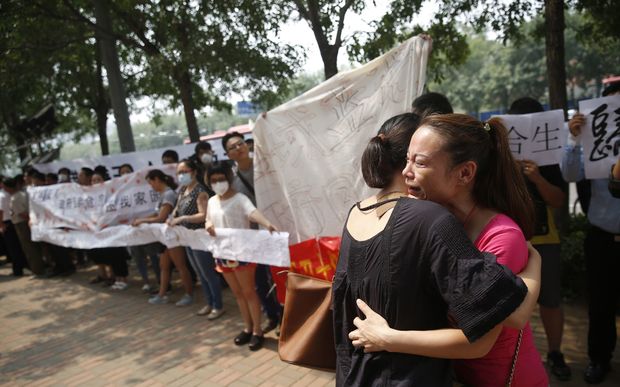 Two women hug one another as they join other residents whose homes were destroyed in the Tianjin explosion. Photo: AFP

Scores gathered outside the Mayfair Hotel, where officials have been giving news conferences.

Residents say the chemical storage warehouses which blew up had been built illegally close to their homes.

The blasts focused on a warehouse which was storing sodium cyanide.

An investigation is under way into what might have triggered the explosions.

The warehouse was storing hundreds of tonnes of sodium cyanide, far more than legally allowed, and was also within 500m of homes, flouting laws which state a 1km minimum distance.

Local media had earlier reported that there were at least three residential complexes within 1km of the warehouse, which belonged to Ruihai International Logistics.

In the latest in a number of small protests, the people gathered at the Mayfair Hotel on Monday said they wanted compensation for their damaged homes, and would refuse to return to them even if they were ruled safe.

"We don't know if there will be further leaks in the future. We could be living near a ticking time bomb," one resident, who gave his name as Chen, told reporters.

In an open letter to the authorities, they said their groundwater could have been contaminated, and that logistics companies and chemical "dumping grounds" remained close to residential complexes.

"Our neighbours lost their lives there. Their screams can never be erased for a long time. How can we live in that 'execution ground' with any peace of mind?" the letter states.