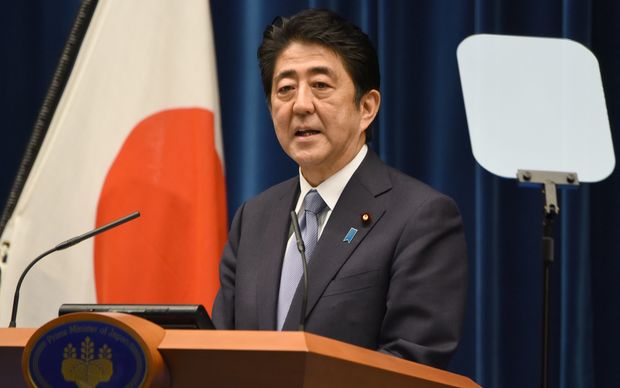 In a statement marking 70 years since Japan's WW2 surrender, he upheld apologies and expressions of remorse made by past governments, but did not issue a new formal apology of his own.

He added that future generations should not "be predestined to apologise".

Both China and South Korea responded by saying they wanted a more "sincere" response from Tokyo.

They suffered extensively under Japanese wartime occupation, and say Japan has never fully atoned for its actions.

Mr Abe said that Japan had inflicted "immeasurable damage and suffering" on "innocent people" during the war.

"Japan has repeatedly expressed the feelings of deep remorse and heartfelt apology for its actions during the war," he said.

"Such position articulated by the previous cabinets will remain unshakeable into the future," the official translation of his remarks said.

He stressed that Japan's post-war generations, which made up more than 80% of the population, had "nothing to do with that war". But he added that the Japanese still had to "squarely face the history of the past".

Mr Abe is under pressure not only to avoid angering China and South Korea, important regional allies, but also to satisfy domestic nationalists who have grown uneasy with the repeated demands that they apologise for historic decisions.

He did not directly refer to the women, known as comfort women, who were forced to be sex slaves for Japanese soldiers during the war, but said that "the dignity and honour of many women were severely injured during wars in the 20th Century".

China's Vice Foreign Minister Zhang Yesui responded to Mr Abe's speech by telling the Japanese ambassador that Tokyo "should make a clear explanation and a sincere apology" to those who suffered during that period.

He also urged Japan to "take concrete actions to gain the trust of its Asian neighbours and the global community", according to a statement on the foreign ministry website.