Gunmen in Mali have killed at least five people in an attack on a hotel in the central town of Sevare, officials say. 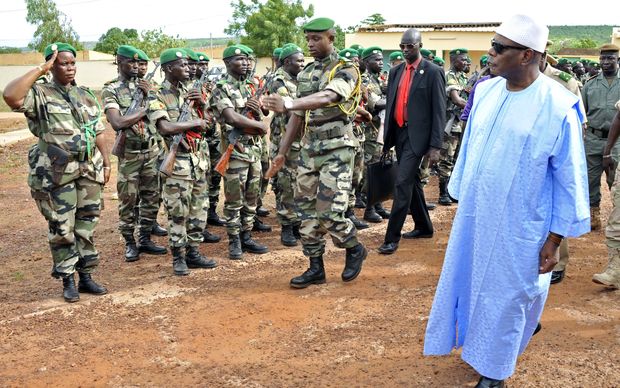 The dead include Malian soldiers.

The UN mission in the country said it believed "a member of the international personnel" was killed in the attack.

An unknown number of hostages are still being held at the Byblos Hotel, which is popular with UN workers. Two of the gunmen have also been killed.

Mali has been fighting Islamist rebels in the north for a number of years.

A spokesman for the Russian embassy in Mali said one of those being held was a Russian citizen. Earlier, officials in Kiev said a Ukrainian citizen was also believed to have been captured.

One source told AFP early on Saturday that a number of hostages had been freed and evacuated but this has not been independently confirmed.

In a statement, the UN mission in Mali (Minusma) condemned the "despicable attack in the strongest terms".

The mission said "shots continue to be fired sporadically at the hotel and in its vicinity".

The BBC's Alex Duval Smith in Mali said the town, which is about 600km north-east of the capital, Bamako, was a trading hub that serves the historic riverside city of Mopti.

A local resident told the BBC that it was the first time the city has been hit by an attack like this.

"Since the beginning of the fighting in Mali, we haven't experienced such a situation in Sevare.

"We would expect these things to happen in Gao or Timbuktu, but this the first time it has happened in Sevare," he said.

Al-Qaeda-linked militants have been fighting the army in northern Mali.

France, the former colonial power in Mali, intervened in January 2013 to stop their advance south to the capital.