Palestinian officials say Israel is "fully responsible" for the death of an infant in an arson attack blamed on Jewish settlers in the West Bank. 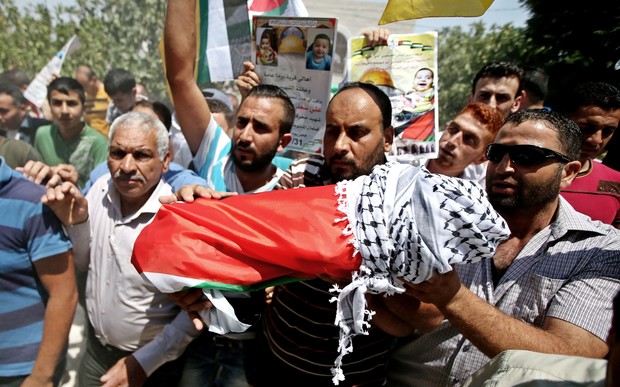 The 18-month-old boy was killed in the night-time attack on two homes in the village of Duma. His parents and brother suffered serious injuries.

Slogans in Hebrew, including the word "revenge", were found sprayed on a wall of one of the firebombed houses.

"This is an act of terrorism in every respect. The State of Israel takes a strong line against terrorism regardless of the perpetrators," Benjamin Netanyahu said in a tweet.

PM: This is an act of terrorism in every respect. The State of Israel takes a strong line against terrorism regardless of the perpetrators.

Mr Netanyahu telephoned Palestinian leader Mahmoud Abbas to condemn the attack, telling Mr Abbas Israel's security forces had been ordered "to use all means to find the murderers", his office said.

However the Palestine Liberation Organisation (PLO), which dominates the Palestinian Authority in the West Bank, said it held the Israeli government "fully responsible for the brutal assassination" of the child, Ali Saad Dawabsha.

"This is a direct consequence of decades of impunity given by the Israeli government to settler terrorism," it said.

While it is unclear what the word "revenge" referred to, the incident resembles what have become known as "price tag" attacks.

Such attacks usually involve acts of vandalism or arson by Jewish extremists as retribution for actions taken by the Israeli government against Jewish settlements or unauthorised outposts in the West Bank, or for violence by Palestinians.

In the overnight attack, Palestinian officials said up to four assailants threw firebombs at the houses, one of which was empty.

Ali Saad Dawabsha died at the scene. His mother, Reham, father, Saad, and four-year-old brother, Ahmad, have been airlifted to hospitals in Israel for specialist treatment.

Pictures from the scene of the attack showed at least one of the buildings completely gutted, with only charred remains left. 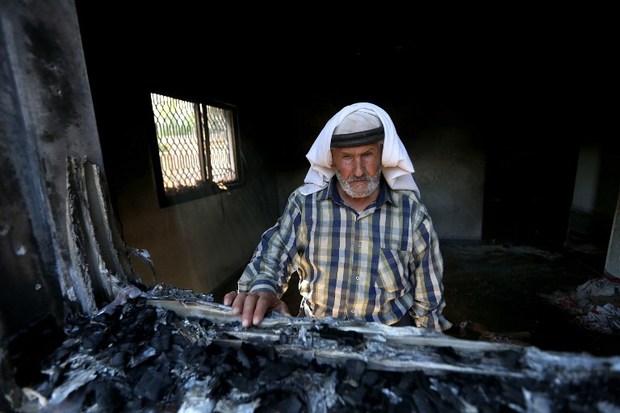 Debris of burned out buildings in the village of Duma in the northern West Bank district of Nablus. Photo: AFP

The killing comes amid heightened tensions between the Israeli state, Jewish settlers and Palestinians in recent days.

On Wednesday, settlers scuffled with police as Israeli authorities demolished two partially built blocks which the high court had ruled were built illegally on Palestinian-owned land, in the settlement of Beit El.

Prime Minister Netanyahu, whose fragile coalition includes pro-settler parties, immediately authorised a start to the construction of 300 planned homes in the settlement, drawing ire from the Palestinians.

Palestinians regard settlements as a major obstacle to building a sought-after state in contiguous territory in the West Bank and East Jerusalem.

About 500,000 Jews live in more than 100 settlements built since Israel's 1967 occupation of the West Bank and East Jerusalem. The settlements are considered illegal under international law, though Israel disputes this.