Scientists have discovered a winged dinosaur - an ancestor of the velociraptor - that they say was on the cusp of becoming a bird. 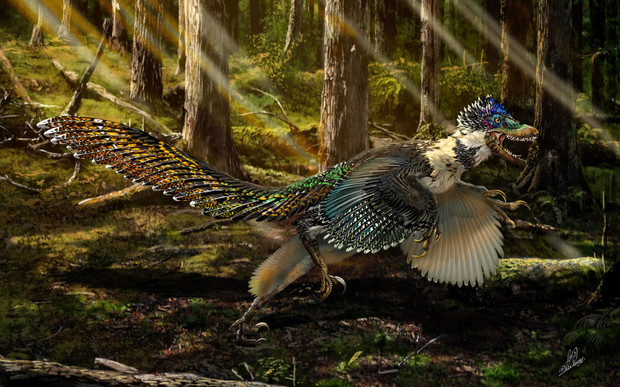 An artist's impression of Zhenyuanlong in a Cretaceous forest. Photo: Supplied/Zhao Chuang

The 2 metre tall creature was almost perfectly preserved in limestone, thanks to a volcanic eruption that had buried it in north-east China.

And the 125 million-year-old fossil suggests many other dinosaurs, including velociraptors, would have looked like "big, fluffy killer birds".

But it is unlikely that it could fly.

The dinosaur has been named Zhenyuanlong, meaning "Zhenyuan's dragon" - in honour of the man who procured the fossil for the museum in Jinzhou, allowing it to be studied.

The University of Edinburgh and the Chinese Academy of Geological Sciences collaboration is published in the journal Scientific Reports.

Lead researcher Dr Steve Brusatte said it was "the single most beautiful fossil I have had the privilege to work on".

"It has short arms, and it is covered in feathers [with] proper wings with layers of quill-pen feathers," he said. 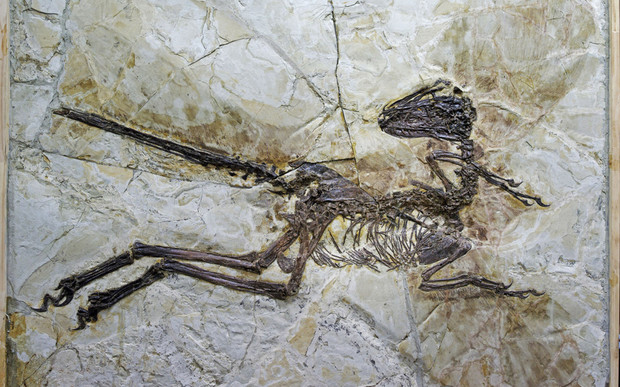 The fossilised skeleton of the dinosaur clearly shows its quill-like feathers. Photo: Supplied

"So even though this is a dinosaur, even though it is a close relative of velociraptor, it looks exactly like a turkey or a vulture."

Dr John Nudds, a senior lecturer in palaeontology at the University of Manchester, told the BBC the find was part of an "increasingly complex picture" of emerging evidence "that certainly a lot of [dinosaurs] and possibly even all of them had feathers or at least downy hair".

Dr Brusatte said: "It will blow some people's minds to realise that those dinosaurs in the movies would have been even weirder, and I think even scarier - like big fluffy birds from hell."

He said its large body made it unlikely Zhenyuanlong would have been able to fly.

"So maybe [wings] did not evolve for flight - perhaps they evolved as a display structure, or to protect eggs in the nest," he said.

"Or maybe this animal was starting to move around in the trees and was able to glide."

"There are [museum] storerooms full of new dinosaur fossils that have never been studied before.

He added: "This is the most exciting time maybe in the history of palaeontology."