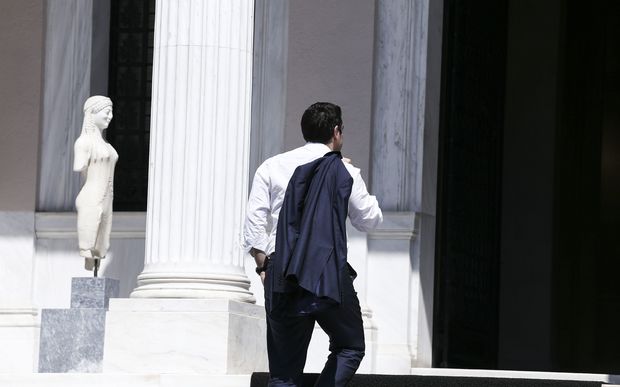 Four pieces of legislation must be passed by the end of Wednesday including pension and VAT reforms.

The bailout is conditional on Greece passing all the agreed reforms - including raising tax revenue and liberalising the labour market - in parliament by Wednesday.

Finance ministers from all 28 EU countries are holding a scheduled meeting in Brussels on Tuesday morning, where they will discuss the situation in Greece.

If the deal fails, Greece's banks face collapse and the country could then be forced to leave the euro.

After walking into a party meeting to applause, Mr Tsipras tried to rally his Syriza lawmakers behind the new proposals ahead of a snap vote in parliament.

He has appealed to them to back the tough reform package after abruptly offering last-minute concessions to try to save the country from financial meltdown.

Mr Tsipras will have to quell dissent within his party - probably by sacking ministers - and get unpopular austerity measures passed, such as pension reform and a higher goods and services tax.

He will need the support of opposition MPs to pass the package.

Defence Minister Panos Kammenos, a junior coalition partner, has already said he will not support the measures.

The latest package was strikingly similar to the terms Greeks rejected in a referendum just last Sunday, angering members of the Syriza's hardline Left Platform wing.

Five of them signed a letter saying it would be better to return to the drachma, Greece's pre-euro currency, than to swallow more austerity with no debt write-off.

Junior governing coalition partner, the Independent Greeks party, said it could not support bailout proposals from lenders, but signalled it would remain in Mr Tsipras's government.

While there is relief the country has escaped bankruptcy and the collapse of its banking system, many Greeks have vented their fury at an agreement that contains tougher proposals than those they rejected in the referendum.

Announcing the deal in Brussels, EU President Donald Tusk said the agreement was unanimous. He tweeted that a bailout programme was "all ready to go" for Greece, "with serious reforms and financial support".

Amid one of the worst crises in the EU's history, the head of the European Commission said the risk of Greece leaving the euro zone had been averted.

Parliaments in several euro zone states also have to approve any new bailout.

"There will not be a 'Grexit'," said European Commission chief Jean-Claude Juncker, referring to the fear that if there had been no deal, Greece could have crashed out of the euro.

Many Greeks and others believing unduly harsh terms are being imposed have expressed their widespread anger online using the hashtag #ThisIsACoup.