Air New Zealand passengers who have been trying to get to Bali will now have to wait until at least Tuesday because of a volcanic ash cloud. 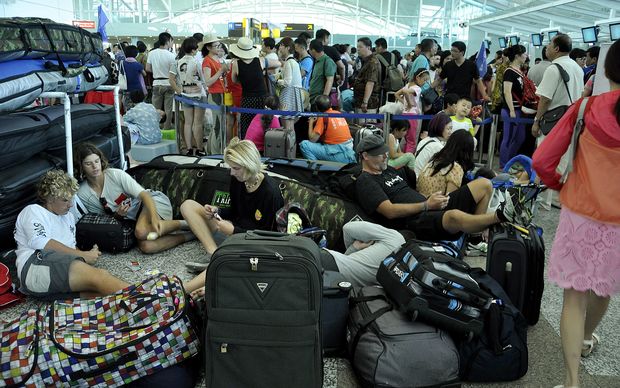 Flight NZ245 had to turn back today and has returned to Auckland because of volcanic activity from Mount Raung in East Java province.

Air New Zealand says a change in wind conditions meant ash was forecast to affect its operations at Denpasar Airport.

It will now leave on Tuesday at 10am.

Another plane, Flight NZ246 that was supposed to leave Bali for Auckland today is also delayed, and will now leave Indonesia also on Tuesday (at 4.30pm).

However, this is subject to conditions on the day.

Australians stranded in Bali say airlines have not been providing enough flight information, with some travellers getting more instructions from other passengers and online facilities.

Virgin Australia and Jetstar have again cancelled flights between Australia and Bali today, saying conditions are no longer safe, after resuming flights in and out of Denpasar overnight.

All Virgin flights for today have been cancelled, with the airline to make a decision this afternoon about tomorrow's services.

Jetstar cancelled all morning flights departing from Bali, with evening flights to be confirmed.

Lizzy Polak, who has been stranded in Bali since Wednesday, told the ABC her airline had not been of help.

"[Jetstar] haven't given us any information to alert us, [we get information] only if we physically go [online] ourselves and check," she said.

"We only found out our flight was cancelled from another Australian lady at our motel."

Ms Polak said she was forced to pay for all expenses herself, as her travel insurance was not covering anything.

"We are paying for our own accommodation until Monday, and will see if we have to extend [our stay] then," she said.

"Jetstar or our travel insurance are not paying for any expenses. They aren't giving us any information.

"We went to the airport to talk to the Jetstar staff and there was no staff and no one to talk to, they just gave us a hotline to call that only worked in Australia.

Flight delays leave a Melbourne family stuck in Indonesia with 'an hour's sleep, crying kids and a monkey eating our breakfast'.

"I feel that Jetstar is definitely not supplying enough information for us or support at all."

Sunshine Coast man Tony earlier today told 612 ABC Brisbane he was also "getting more information from the website" than from his airline.

"We've been up all night trying to get flights and there's still nothing flying. No information, you don't know what's going on," he said.

"I've missed an event this weekend. I had to put a crew together, I made 130 phone calls in one day.

"We're stuck in a motel, we've got limited access to the internet and we need to get home.

"So anybody who's got any ideas on how to do it, it would be great to know."

'Lucky ones' have returned home

Mt Raung, located 150 kilometres from Denpasar Airport, is continuing to erupt, and winds are blowing in an unfavourable direction and are forecast to do so for the rest of the day, Virgin said.

The latest advice from Virgin's meteorologists and the Volcanic Ash Advisory Centre (VAAC) is that conditions are no longer suitable for operations in and out of Denpasar Airport.

Hundreds of flights have been affected by the eruption, and some travellers have been told it could take until the end of the month for them to get a flight home.

Swan Hill resident Carla Green was due to leave Bali two days ago but is now scheduled to fly home on Thursday.

"Lucky we had been able to rebook the same accommodation we're in but that's only until Monday so we'll have to look elsewhere for those last few nights," she said.

VAAC spokeswoman Rebecca Patrick said the ash plume was moving back towards Bali.

"We're looking at the winds that are around four to five kilometres up in the atmosphere and at those levels the winds are north-westerly, which is pushing ash to the south-east of the volcano and towards the island of Bali," she said.

"At this stage it's not right over Denpasar Airport, but it is getting quite close and we've been keeping in close liaison with the airlines that are flying within that region."

Earlier this morning, the general manager of Angkasa Pura, which operates Bali's airport, had said all 36 international carriers and 18 domestic airlines had started flying to and from the airport again.

Some lucky passengers returned home as both Virgin and Jetstar temporarily resumed flights in and out of Bali overnight.

Both airlines organised additional services to return stranded holidaymakers, however they must still adhere to the latest advice from VAAC provided this morning.

According to VAAC, volcanic ash is abrasive and can cause engine failure for planes.