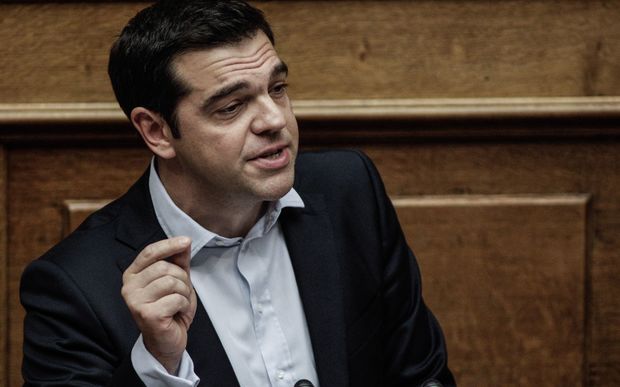 Mr Tsipras promised Greeks their pensions and wages would be safe.

Earlier he put new proposals in a letter to eurozone partners, accepting most of what was on the table before talks collapsed, but with conditions.

Germany says talks with Greece will not be possible until after a referendum called by Mr Tsipras for Sunday.

Eurozone finance ministers held a conference call on Wednesday and also decided to postpone any further talks with Greece until after Sunday's referendum, according to Slovakia's Finance Minster Peter Kazimir.

In the poll Greeks will be asked to accept or reject proposals made by creditors last week.

Mr Tsipras's latest offer to creditors is tied explicitly to agreement on a request for a third bailout from the eurozone's bailout fund lasting two years and amounting to €29.1bn.

In his address Mr Tsipras thanked Greeks for their "calm" in the face of bank closures and said their salaries and pensions would "not be lost".

He angrily denied he had a secret plan to take Greece out of the euro, calling those who accused him of this "liars".

Greek banks did not open this week after the ECB froze their liquidity lifeline.

Withdrawals from cash machines are capped at just €60 a day and long queues have been forming outside banks.

However, up to 1,000 branches re-opened on Wednesday to allow pensioners - many of whom do not use bank cards - a one-off weekly withdrawal of up to €120.

The Associated Press news agency said many pensioners had waited outside banks from before dawn, only to be told to return on Thursday or Friday.

Some pensioners were told their pensions had not yet been deposited, AP said.

"It's very bad,'' said Popi Stavrakaki, 68. "I'm afraid it will be worse soon. I have no idea why this is happening."

Close to 300 pensioners marched on the Bank of Greece in Athens after being given only a small sum from banks in the morning instead of the entire €120.

After Mr Tsipras' letter was published, European markets surged on the news Greece might be willing to accept a deal.

But German Chancellor Angela Merkel said during a special parliamentary session in Berlin that no new bailout talks would be possible before Greece holds Sunday's referendum.

BBC Europe correspondent Chris Morris said that as well as seeking further amendments to the creditors' proposals, Mr Tsipras's latest offer is tied explicitly to agreement on a request for a third bailout.

In other words, Mr Tsipras is attaching new conditions to any agreement on economic and structural reforms, our correspondent says.

And his application for a third bailout was accompanied by a request for debt restructuring that other eurozone countries would, at this stage, be unwilling to consider, he added.