People in Greece are deeply uncertain about their country's economic future following its failure to make a €1.5 billion payment to the International Monetary Fund (IMF). 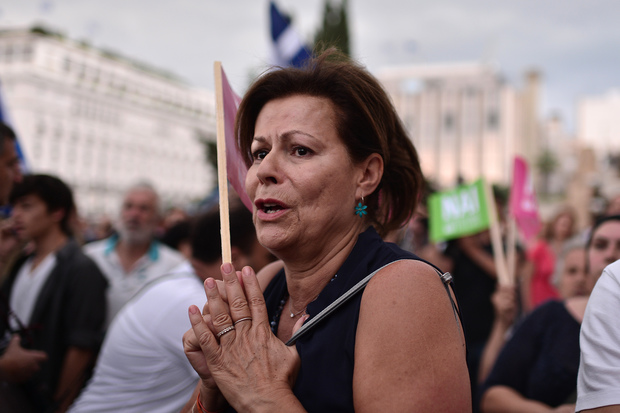 Pro-eurozone protesters gather in front of the parliament building in Athens on 30 June. Photo: AFP

Greece today became the first advanced country to fail to repay a loan to the IMF and it is now formally in arrears. There are fears that this could put Greece at risk of leaving the euro.

The IMF confirmed at about 10am NZST that Greece had failed to make the payment.

Eurozone ministers had earlier refused to extend Greece's bailout. When the bailout expired, Greece was cut off from billions of euros in funds and could not meet its IMF repayment. 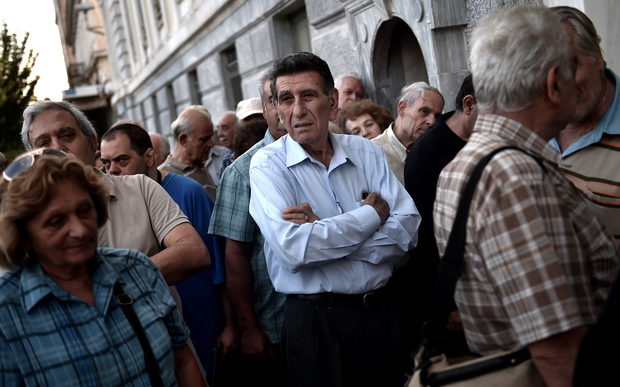 Some banks have re-opened in Greece - but only to allow pensioners to make a limited one-off weekly withdrawal. Photo: AFP

BBC Europe Editor Katya Adler, who has been in Athens said there was a "huge sense of tension" in Greece about what could happen next.

"If it does fall out of the eurozone, as the phrase has been coined, nobody knows exactly what that means," she said.

"Why? When the eurozone was created about 15 years ago, there were no rules or regulations written in, as to how a country could leave it. It was thought to be just absolutely impossible."

However, Professor Spyros Pagratis from the Athens Business School said the missed payment - in itself - would not trigger a financial meltdown.

"Missing a payment to the IMF doesn't mean [an] immediate credit event," he said.

"We have signals around from the official creditors of Greece that we may not trigger gross default clauses, and the stance won't change with respect of that missing payment."

Greece's left-wing Syriza government, elected on an anti-austerity platform, has been in deadlock with its creditors for months over the terms of a third eurozone bailout.

Eurogroup chairman Jeroen Dijsselbloem said that a Greek request for a new €29.1 billion European aid programme would be considered in a telephone conference on Wednesday.

The European Central Bank is also expected to meet tonight, to discuss whether it needs to impose fresh terms for the emergency loans that sustain Greece's banks.

The IMF said its board would consider Greece's request for a repayment extension, and the BBC said it understood that Greece would submit new proposals to rein in its spending. 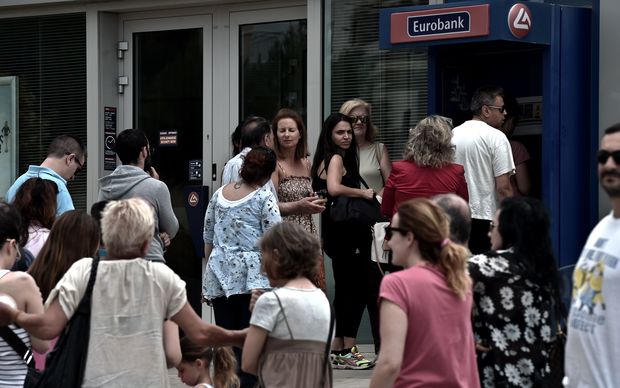 Greeks have been queuing to withdraw cash after the country's banks shut. Photo: AFP

Ratings agency Fitch has cut Greece's credit rating from "CCC" to "CC", which is considered one level above full default.

Fears of a default on Greece's huge public debt of €323 billion have led to long queues of people at cash machines. Withdrawals are capped at just €60 a day.

Greek banks did not open this week after talks between Greece and its creditors broke down.

However, up to 1000 bank branches have now re-opened to allow pensioners - many of whom do not use bank cards - a one-off weekly withdrawal of up to €120.

Greece will hold a referendum on Sunday on whether it should accept its creditors' proposals.

Meanwhile, a worker in a London shoe shop has launched an online crowdfunding campaign to raise the money for Greece to meet its now-expired IMF debt repayment.

He said he had been overwhelmed by the response and messages of support, raising more than €451,000 after just two days towards the €1.5 billion payment.

Surprisingly, the bulk of donations in the first 24 hours came from Britain, which is not a eurozone member.