Tunisia's Prime Minister Habib Essid has announced a clampdown on security after an attack on a holiday resort in which 38 people were killed. 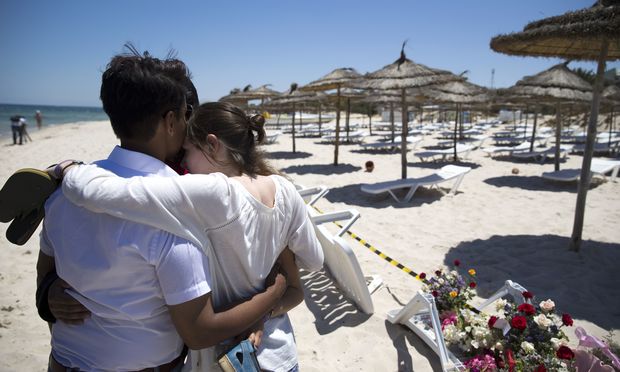 People react at the site of a shooting attack on the beach in front of the Riu Imperial Marhaba Hotel. Photo: AFP

He said army reservists would be deployed to archaeological sites and resorts.

About 80 mosques accused of "spreading venom" will close within a week, he said.

Fifteen of the victims in the attack near Sousse were Britons. The gunman was shot dead.

He was identified as Seifeddine Rezgui, a student not previously known to authorities, officials said.

One Belgian and one German have so far been identified among the dead, the health ministry said. One citizen of the Irish Republic is also confirmed dead. 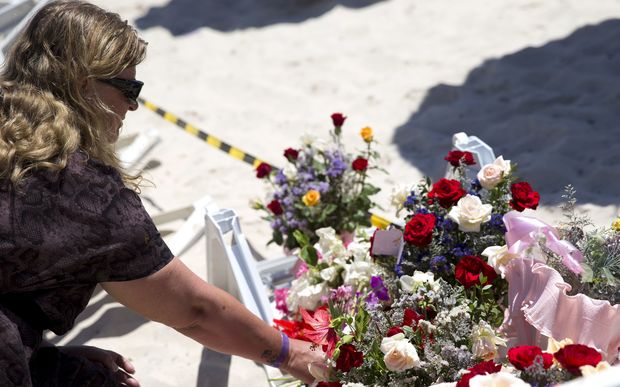 A woman lays flowers at the site of a shooting attack on the beach in front of the Riu Imperial Marhaba Hotel. Photo: AFP

There were also thought to be Tunisians and French killed in the attack, which was claimed by Islamic State (IS). At least 36 people are injured, some seriously. 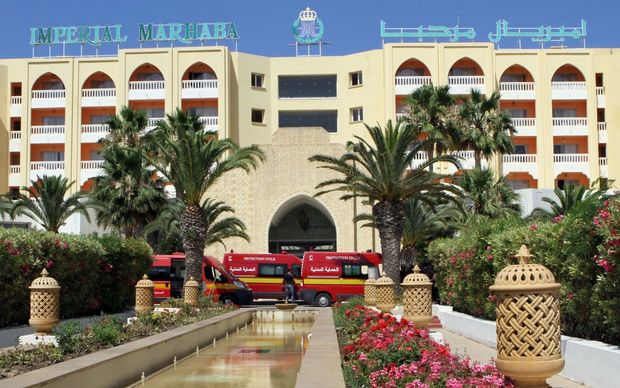 Ambulances parked in front of the Imperial Marhaba Hotel in the resort town of Sousse. Photo: AFP

It was the second major attack on tourists in Tunisia since March, when militants killed 22 people, mainly foreigners, at Bardo museum in Tunis.

Many of the tourists in hotels affected the attack have left the country or are waiting for specially arranged flights, but correspondents noted a few were back by the hotel pool on Saturday, vowing they would continue their holidays as scheduled.

Speaking at a news conference in Tunis, Mr Essid said some mosques outside government control were spreading "venom" and would be shut down.

Mr Essid also vowed to act against parties and groups "acting outside the constitution".

"Without the co-operation of everyone and a show of unity, we cannot win this war."

However, many Tunisians are asking why stricter security measures had not already been put in place following March's attack, says the BBC's Jim Muir in Tunis.

Security officials said the attacker, who posed as a swimmer but was carrying a rifle under a parasol, started shooting on the beach before entering the Hotel Imperial Marhaba, continuing to shoot. 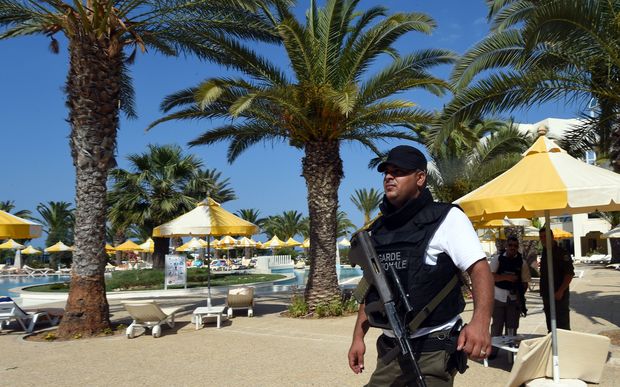 A Tunisian security member stands next to a swimming pool at the resort town of Sousse following the attack. Photo: AFP

A British holidaymaker, Steve Johnson, told the BBC: "We were just lying on the beach as usual and... we heard what we thought at first was fireworks.

"But it was soon pretty obvious... that it was firearms that were being discharged and people were screaming and starting to run."

Another holidaymaker, named only as Danny, said he and his wife had sought refuge in an office when the shooting started.

"We hid in there for about forty-five minutes to an hour, I think," he told the BBC.

"We could hear guns and grenades and explosions and all sorts of things...

"I hid under a table and kissed my wife goodbye thinking that that was going to be the end."

IS said it was behind the attack on what it called a "den of vice".

It identified the gunman by the nom de guerre of Abu Yahya al-Qayrawani. Social media accounts close to the group showed pictures of him. 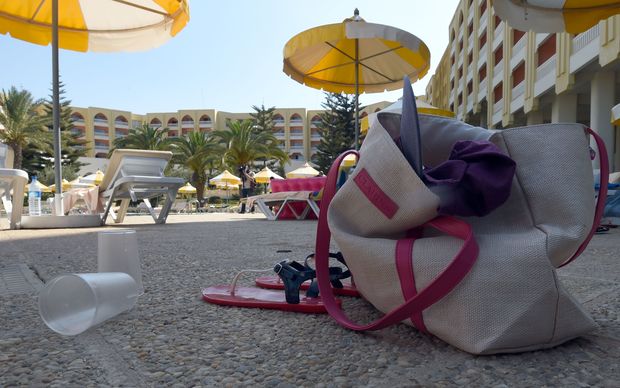 The attack was the deadliest in Tunisia's recent history. The country has seen militant Islamists gain strength since the overthrow of long-serving ruler Zine al-Abidine Ben Ali in in 2011.

However, neither party has been able effectively to combat Islamist violence - which has been made worse by conflict in neighbouring Libya and by Tunisian fighters returning home after joining Islamist campaigns in Iraq and Syria.