The federal government in Australia is proposing changes to citizenship laws to block the return of dual citizens suspected of terrorism. 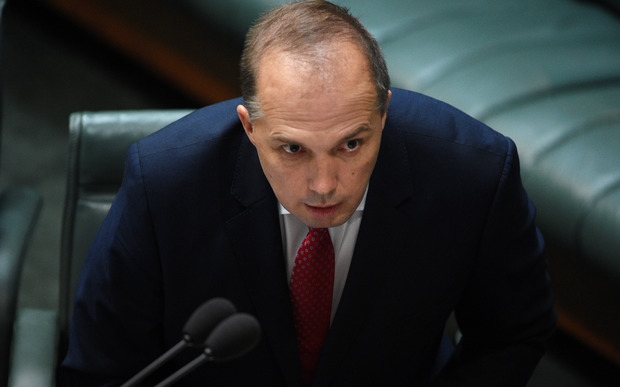 The legislation, which was introduced to parliament today, would also allow the government to deport court-convicted terrorists.

"Australian citizenship involves a commitment to Australia - it should not be taken lightly," Immigration Minister Peter Dutton said.

All citizens owed an allegiance to their state or sovereign, he said.

"It's a common bond that unites us all, whether we were born here or chose to make Australia our home."

The loss of citizenship would occur as soon as it was shown that someone had engaged in terrorism.

Those who engage in conduct to help international terrorist activities, use explosive or lethal devices, provide or receive training connected with preparing for, engaging in or assisting in a terrorist act, would lose their citizenship.

The minister would notify a foreign fighter who had ceased to be an Australian citizen.

He could also rescind that notice if it was in the public interest.

Proscribed terrorist organisations would also be declared by the minister.

While the draft laws are not retrospective, the parliament's intelligence and security committee has been asked to consider whether they should be.

Children of outcast dual nationals could also be banished, although they might claim their Australian nationality via another "responsible" parent.

Lawyers in Australia were today divided on the merits of the proposed legislation.

Constitutional lawyer Professor Greg Craven said a person's citizenship could lapse or self-cancel if they fell under a certain category.

"If your citizenship did lapse in that way, and you presented yourself in Australia, you would be perfectly free to say, 'No, that's not the case, I didn't do it, I wasn't there, I wasn't a member of that body', and ultimately that would have to be determined by a court."

He said opening the matter up for a court appeal could counter concern the process could be abused.

But the legislation did not sit well with everyone in the legal sector - particularly the notion of the automatic application of provisions.

Mr Dutton has said senior public servants, advised by government lawyers, would play a role in deciding whether a dual national accused of terrorism had met the criteria to be stripped of their citizenship.

Greg Barns, from the Australian Lawyers Alliance, said: "On who's evidence are we going to rely? It's unlikely to work, it's certainly unfair, and it's unnecessary".

"There's no doubt there are still constitutional problems with this bill, and that's one of them.

"It is not the executive in our system of governance to assume the role of the judiciary, and that's what it looks like."