Former United States House Speaker Dennis Hastert has pleaded not guilty to charges he paid someone to stay quiet about past wrongdoing. 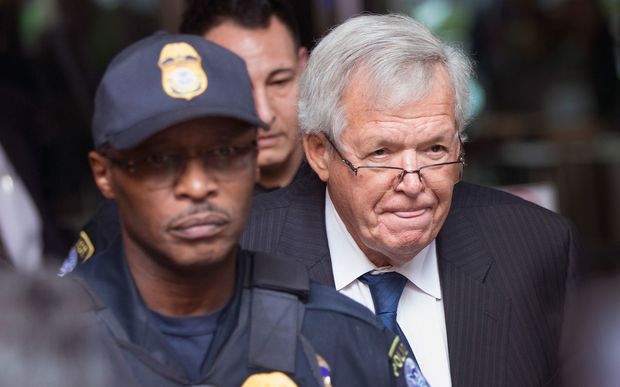 The plea was entered by lawyers acting on behalf of the 73-year-old at the US District Court in Chicago.

The Federal Bureau of Investigaiton (FBI) said Mr Hastert broke federal banking laws by withdrawing hundreds of thousands of dollars at once.

The pay-off is related to allegations of sexual abuse, according to US media, but there are no sex charges.

According to the indictment, Mr Hastert paid "Individual A" $US3.5 million to keep quiet about "prior misconduct" against the person.

He paid nearly half of the money before federal agents noticed.

He has not spoken about the allegations, which relate to when he was a high school teacher and wrestling coach at Yorkville High School in Illinois in the 1970s.

Judge Thomas M Durkin set a bond of $US4500 and ordered him to surrender his passport.

His lawyer, Thomas C Green, has been involved in a handful of other high-profile US cases involving politicians, such as the Watergate scandal with former US president Richard Nixon.

Ms Burdge said she was never paid by Mr Hastert, so the indictment showed there could be other victims.

Mr Reinboldt told his sister about the alleged sexual abuse years after it happened, in 1979, when he revealed to her he was gay.